Campaign Flags of our Politicians

I posted about the new Obama poster that was an impressionistic version of the U.S. flag wherein the “O” replaced the field of stars and there were a few artsy-ish type stripes. You know the one.

Well, apparently the left got their spin machine going and found an example from 150+ years ago to try to legitimize the usage in modern times (h/t to Sam Howard). The example? Why, none other than Honest Abe! Actually, that’s a little more reminiscent of the Obama flag from 2008:

But I can do them several better. (History alert!): It looks like Lincoln wasn’t the only one to do such a thing. In fact, it appears as if it was indeed a common political practice during that campaign and contemporary ones….over 100 years ago: 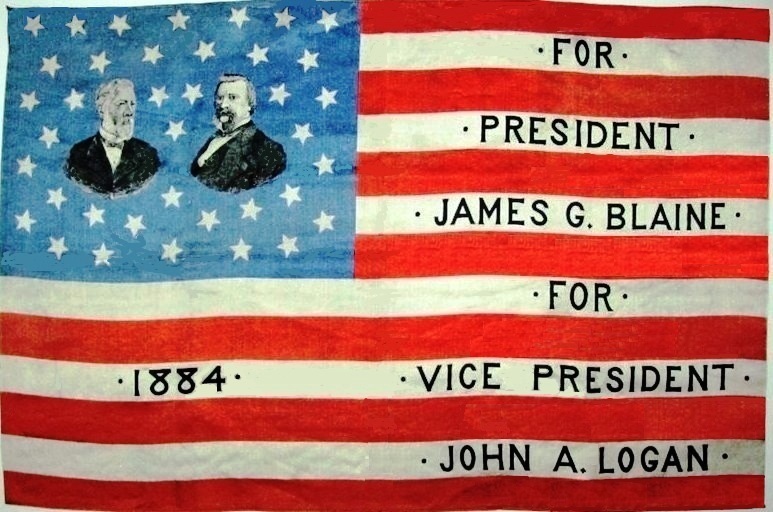 There is an important caveat, though. The way a political campaign was waged and organized back then is completely different than today. In short, none of the above had a centralized campaign store selling items. More often than not, these items were produced at the local level. Basically, while it appears as if it was a common practice to use the U.S. flag, there is no telling whether the candidates themselves explicitly endorsed such usage. Nonetheless, the practice appears–at least going by the latest examples I could find–to have lasted until around the turn of the last century. Apparently by then the usage of a portrait in place of the stars had been discarded.

Since then, nothing. Well, that is unless President Obama would like to be compared to the Presidential Candidate who last used such a device.

I have no problem with Hussein’s image…on the Muslim Brotherhood flag.

It could be useful to place the examples shown in this post in some historical context. The current law governing the display of the flag was not enacted until 1942. Prior to that there was an unofficial flag code adopted by a number of private organizations in 1923. The current law “forbids” modifying the flag with words, pictures, insignia, etc. I put forbids in quotes because First Amendment freedoms supersede regulations governing the display of the flag.
The flags shown remind me of the regimental colors carried by Union army regiments in the Civil War. It was very common to stitch the name of the regiment into the white stripes of an American flag along with the names of the battles in which that regiment had fought. Confederate units did the same thing with Confederate flags.
Of the examples shown in this post, only the Nixon and Obama flags post-date the flag code.
Of course, what makes the Obama flag particularly significant is that it is not an isolated example but is part of a pattern of a weird personality cult that has sprung up ever since Chris Matthews got that thrill up his leg.
See for example http://www.humanevents.com/2012/09/20/the-creepy-obama-cult/

You’ve completely missed the point. The right wing reaction like the ones on Media Matters such as “These posters are beyond creepy. And they are also stunning displays of egotism and disrespect even from a president not known for his humility and reverence for America’s traditions. [Breitbart.com, 9/20/12] fail to place the Obama poster in historical context in their effort to criticize him. The left’s spin as you call it provides that factual context. How are the facts “spin”?
Marc thanks for this post but it’s funny that you miss the point and that it’s posted under the banner “Obamanation”. All you have to do in the future to get the type of comments about the President from the two resident nitwits is to post his picture.

No Phil, I haven’t. I know the point of the historical spin, ’cause that’s what it was, no matter what you want to say. It’s a classic case of ex post facto legitimization. So, to repeat, MY point is “I find it amusing that the left is suddenly interested in the cultural mores of the mid-19th century as a reference point.”

I have seen the flag used as a cheap promo gimmick to sell stuff like used cars,etc.I think that sucks.
Funny flag story-I was walking along Westerstraat in Amsterdam about 12 0r so years back and I saw a Rhode Island flag flying over a garage where the owner was selling furniture.I approached him(he looked kinda like an old time pirate)and he spoke good English and asked him if somoene in his family was from RI.He asked me”What’s Rhode Island?”I explained it was the smallest state in the US and I lived there,he started laughing and said-I didn’t know where that flag was from,but it was really nice so I hung it up.It’s better than the Dutch flag”.True story.