The Messiah May Have Used the Word “Wife”

Of one thing, we can be reasonably confident: Coverage of proof and arguments against that sliver of papyrus purporting to prove that Jesus had a wife will have a far smaller profile than the initial boom of proclamations that it had been discovered.
Not surprisingly, the Vatican has stated its opinion that the artifact is “counterfeit,” but what I found most interesting about the article is that it’s the first time I’ve seen a picture of it: 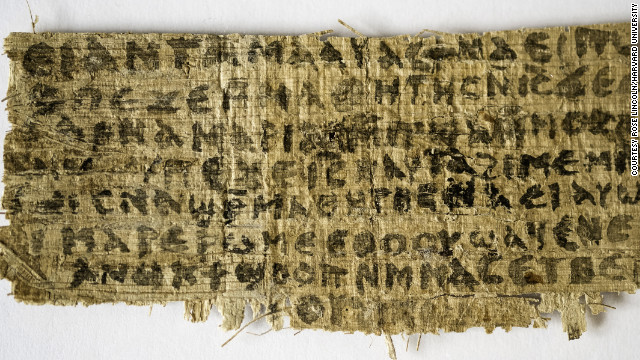 I’ll confess, off the bat, that I’m not able to read ancient Coptic text, but unless it’s a remarkably compact language, that’s really not much context on which to come to any conclusions. The paragraph before could have made clear that it was a parable. The paragraph to follow might have been an explanation of the Church’s view that it (the Church) is the “bride of Christ.” Or the whole thing might be some piece of nefarious propaganda.
I don’t know, one way or the other, but the credulity with which such items are passed around is telling, especially with regard to the news media and the stories that it deigns to amplify.

While the suggestion that Jesus had a wife is certainly not consistent with anything the Church has taught over two millenia — and while that alone is enough to evoke giddy excitement in the main-stream media — my thinking is that we should always be cautiously open to revelation.
There is much we don’t know about Jesus’ everyday life. Is it possible that He had a wife and that God is choosing this particular time in history to reveal it?
Here’s hoping that scholars will use the best of their talents and methods to learn the truth about this document, whatever that truth may be.

As I understand it, the gospels “accepted” by Constantine cover the life of Jesus only through his early years, then skip to the last month or so before his crucifixion. So, there is no mention of his middle years. As a “good Jewish boy” it seems acceptable that he would have married. Little is really known about the unaccepted gospels, other than those found in the Dead Sea, and Nag Hamada, Gospels. Outside of the Catholic faith, there is a long tradition from early on that Christ was married. It is usually presumed he was married to Mary Magdalene. There is little, or no, scriptural support for the Catholic position that Magdalene was a prostitute. (No, I didn’t learn this from “The DaVinci Code”.) When considering material in the Gospels, it is well to remember that they were originally in Aramaic, translated to Greek, translated to Latin, and then to English. If you ever played “telephone” as a kid, you understand the possibility for loss and addition. Unless the Coptic fragment is proven wholly counterfeit, it is well to remember that the Coptic faith is older Christianity than Catholicism. The reference to a wife is not conclusive, but it is another hint among many others. For myself, it does not seem unlikely that Christ was married. Nor, does it make much difference if he was. Little is heard of a wife, but look how little we know of Christ’s siblings. The brothers James, Joseph, Simon and Judas are named. The sisters are only slightly acknowledged but not named, similar to the reference to “wife” in the Coptic fragment. However, the sisters are not denied. Of course,in the Christian faith the siblings are accepted as half-brothers and half-sisters. This requires interpolation of scripture, scripture makes no such distinction. Interpretations of scripture… Read more »

Quoting scripture from memory can be dangerous for me. RE: the homosexual angels, I was thinking of Lot and his daughters. Lot brought two male angels to his home, where he resided with two daughters. His house was surrounded by homosexuals (I recalled them as angels of Lucifer’s stripe) who demanded that the male angels be sent out so that they might “know them”. Lot offered his virgin daughters, they were refused. The angels blinded the men around the house and escaped. Lot and his daughters also escaped. All was not well, the daughters took Lot to a cave where they got him drunk and seduced him. Both daughters became pregnant by him.

Interesting and possibly informative to see the actual item.
The contrast between the letters and the condition of the material makes it looks like a message was newly “painted” onto very old material.

Despite the fact that the scriptures mostly depic the accounts and expereinces of men, to be sure women did play important roles in Biblical times and the scriptires do not neglect to include that information. This is particularly true in the case of Christ’s death and reserection. In fact it is there that women recieve some of the greatest attention given to them throughout the entire Bible. I will not begin quoting scripture, but one only has to read the Gospels as well as Acts to see the siginificance of role women played during this time. That said, it seems only reasonable that if Christ was married for sure this would have been made mention of during these accounts. It seems most reasonable that he was in fact not married. For neither his wife was mentioned at any time nor his children. If he was married, certainly he would have married during his twenties and most likely would have had young or infant children at the time of his death. And his wife and children would have needed to be cared for after his death. While Christ was on the cross the scriptures go as far as to mention that his closest diciple, John, was given charge to care for his mother after his death. Certainly, Christ would not have neglected to arrange for someone to care for his wife and children and they would have been there at the foot of the cross, yet there is absolutely no mention of this nor the slightest inference in the Gospels or Acts of the Apostles. I do not see why if Christ was married to Mary Magdaline, the scriptures would make mention of her without giving reference to her as his wife. One could argue that is it becasue she was… Read more »