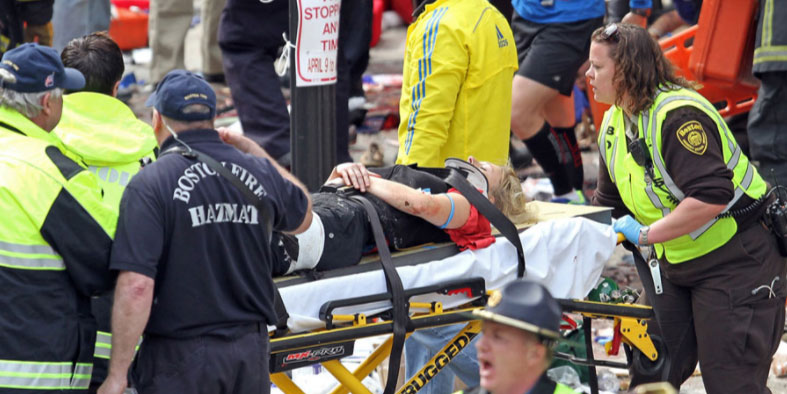 A press release from the Middlesex County (MA) District Attorney, via Reuters, has information on everything that’s been confirmed as of 5AM, related to last night’s murder of an MIT police officer and shootout in Watertown, very likely related to the Boston Marathon bombing…

Police are investigating a fatal shooting of MIT campus police officer by two men who then committed an armed carjacking in Cambridge, Middlesex Acting District Attorney Michael Pelgro, Cambridge Police Commissioner Robert Haas, and MIT Police Chief John DiFava announced this evening.
At approximately 10:20 p.m. April 18, police received reports of shots fired on the MIT campus. At 10:30 p.m., an MIT campus police officer was found shot in his vehicle in the area of Vassar and Main streets. According to authorities, the officer was found evidencing multiple gunshot wounds. He was transported to Massachusetts General Hospital and pronounced deceased.
Authorities launched an immediate investigation into the circumstances of the shooting. The investigation determined that two males were involved in this shooting.
A short time later, police received reports of an armed carjacking by two males in the area of Third Street in Cambridge. The victim was carjacked at gunpoint by two males and was kept in the car with the suspects for approximately a half hour. The victim was released at a gas station on Memorial Drive in Cambridge. He was not injured.
Police immediately began a search for the vehicle and were in pursuit of the vehicle into Watertown. At that time, explosive devices were reportedly thrown from car by the suspects. The suspects and police also exchanged gunfire in the area of Dexter and Laurel streets. During this pursuit, an MBTA Police officer was seriously injured and transported to the hospital.
During the pursuit, one suspect was critically injured and transported to the hospital where he was pronounced deceased. An extensive manhunt is ongoing in the Watertown area for the second suspect, who is believed to be armed and dangerous.
The case is being investigated by local, state and federal authorities working in cooperation. The Massachusetts State Police Bomb Squad is assessing and removing any potentially explosive devices that may have been thrown on the street in Watertown by the suspects.
The investigation remains active and ongoing.

There are multiple media reports that the dead carjacker is the “black hat” guy wanted by the FBI in connection with the Boston Marathon bombing, and the carjacker still at large is the “white hat” guy.
Overnight, there was lots of speculation in social media that White hat guy was Sunil Tripathi, who disappeared from Brown University in mid-March. There hasn’t been any official confirmation of this, and Pete Williams et. al. from NBC News, who have been pretty small-c conservative and accurate with details this week, are reporting that this is not the case, as the suspected terrorists are “foreigners with military training”, which wouldn’t describe Tripathi.
UPDATE:
The MIT police officer who was killed has been identified as Sean Collier. From the Associated Press…

Cambridge police and the Middlesex District Attorney’s office says the officer was responding to a report of a disturbance when he was shot multiple times. He later died at a hospital.

The brothers had been living together on Norfolk Street in Cambridge. An uncle, Ruslan Tsarni of Montgomery Village, Md., told The Associated Press that the men lived together near Boston and have been in the United States for about a decade. They came from the Russian region near Chechnya, which has been plagued by an Islamic insurgency stemming from separatist wars….
In the photo essay, Tamerlan says: “I don’t have a single American friend, I don’t understand them.”

So much for the domestic terrorism meme.

We just learned that these two animals have been in the US since they were 9 and 15 respectively. They presumably did not come here and live on their own at that age. So does that mean that they have family here? Like, immediate family who are still here now …?

Monque: “We just learned that these two animals have been in the US since they were 9 and 15 respectively”
I guess that means that their identities are known.

Mike, the ‘masses’ believe what they are told by the media. Critical thought is in short supply. And the media follows some distinct rules nowadays:
Make the lie big, make it simple, keep saying it, and eventually they will believe it. Hitler
See Obamacare
A lie told often enough becomes the truth. Lenin
See Benghazi
And if you like your doctor, you can keep him!
See all of the above
And to brighten you up, one from a real leader:
Socialism only works in two places: Heaven where they don’t need it, and hell where they already have it. – Ronald Reagan

“Socialism only works in two places: Heaven where they don’t need it, and hell where they already have it. – Ronald Reagan”
Great post Lance. I highly recommend a visit to the Reagan Museum in Simi Valley. I was there last week and it was inspiring. The country under Hussein Obama has changed so radically. The contrast was striking and quite bittersweet. We are living in a different country now. HusseinCare is symbolic of the country’s lurch to socialism. It is the Trojan Horse of a great country in decline.

God bless the Police (union members) that caught them.

“God bless the Police (union members)’
Yes Jim great point…if they were not union members the guy would still be shutting down a major metropolitan area….just like all the soldiers fighting in all our wars…oh wait…they aren’t union. Can we get a local chairman of the Teamsters dispatched?

Am I the only one concerned about civil liberties? From the facts known to me, these guys are “mass murderers”. Further information may develop, they may in fact be “Islamic Terrorists”. We have accustomed Boston to a “lock down”, which will make it easier in the future. We have decided that there is a “public safety” exception to Miranda (there may well be,and perhaps there should be, but I have never heard of it). This suggests to many that more arrests will be concerned with “public safety”. Kidnappers for instance. There is now some question whether they should be tried as “criminals”, or face a military tribunal. There may well be facts unknown to me, but pending developments they are criminals.
Please so not mistake this to suggest that approve of their actions in any way.

There is a “public safety” exception to the Miranda rule but it is limited to questions designed to identify and remove immediate threats to public safety. The case that created it concerned a defendant who had discarded a gun while being chased by police. The police asked him where the gun was without reading his rights. The court held that a loaded gun lying around for someone to find constituted an immediate threat and the interest in recovering it outweighed the interest in informing the suspect of his rights.
It seems to me that it’s premature to decide how to handle Dzhokhar Tsarnaev. If he was associated with Al Qaeda or one of its offshoots than he could be turned over to the military, although he doesn’t necessarily have to be. If he and his brother acted on their own, even if motivated by jihadist ideology, then he should be treated as a regular criminal defendant, just like Tim McVeigh, Eric Rudolph or Ted Kaczynski.

NYPost now reporting that the FBI is close to identifying the marathon bomber. Their sources tag it to a second Elvis impersonator …
/ridicule

Strange, it is now the 23rd and not a peep about this in the ministry of truth corporate media.

Thanks for the comment. The good news is that we just started this blog up after years when it was combined with another blog at a different URL, so some very old posts are still kind of close to the top. This post is from 2013.

The bad news is that we didn’t come up with a better way to make that clear. At the very least, I’ll take the “breaking” out of the headline.