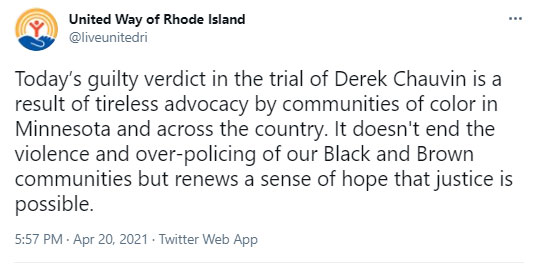 Justice is supposed to be about the facts of the case.

That is the context in which we should consider the reckless rhetoric out there about the Derek Chauvin case, such as the tweet in the featured image of this post, from the the official Twitter account of the United Way of Rhode Island.  The United Way is saying one of two things:

The first possibility should set off alarm bells for anybody of good will.  The second is currently held as a sort of truism about “systemic racism,” but it’s actually a radical assumption — earth-shatteringly so, to the degree that it really shouldn’t just be asserted.  Otherwise, it will transform into option #1 through inexorable logic.

Given the facts of the particular case at hand, one could reasonably suggest that the outcome would have been the same without any “tireless advocacy.”  (Note that the existence of the bystander video counts as evidence, not advocacy, in this context.)

If the evidence would have produced justice by itself, the United Way and other activist groups and individuals are imposing something unnecessary.  They are promoting the principle that justice requires activism, which means that judicial outcomes should be the result of competing groups.

Of course, that’s not really what they intend, because progressives don’t believe opposing views are legitimate.  In other words, they want to infect our legal system with implicit advocacy, while invalidating the advocacy rights of others.  By their own terms, this extinguishes the very possibility of justice.

Put differently, they are discounting the entire idea that we can work together as a society, which isn’t a very united way.