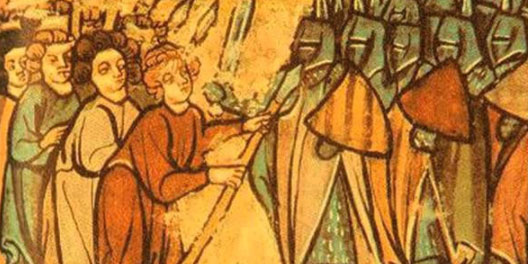 An Antecedent of Our Modern Witch Hunts

Over the last century, the notion of witch hunts has become so anathemized as to become inverted.  Being accused of being a witch hunter carries the same stigma that being accused of being a witch once did.  Just so has our ability to understand the world been tangled up in an imperative of uncertainty.  Without due respect for objective reality and a shared desire for truth, every rhetorical bullet simply ricochets until every dispute is about pure power — which side can enforce its version of the truth.

Nonetheless, the identity-politics cancel culture by which we’ve been infected cannot be understood without recognizing that it is a modern form of witch hunting.

Witchcraft “was a crime imputed with so much ease, and repelled with so much difficulty, that the powerful, whenever they wanted to ruin the weak, and could fix no other imputation upon them, had only to accuse them of witchcraft to ensure their destruction.”  This succinct explanation comes from Charles Mackay’s 1841 work, Memoirs of Extraordinary Popular Delusions and the Madness of Crowds (p. 230).

For his first example, Mackay introduces the Frieslanders, who created an early version of the modern republic in the area of what is now western Germany and the eastern Netherlands.  On the eastern edge of the confederacy lived the Stedinger.  Whether they were on the frontier of an expanding experiment in freedom or were an outpost of native independence as European systematization spread throughout the continent, the Stedinger endured escalating friction against the surrounding feudalism from the time the local archbishop recognized their right to hold their own land around 1100 to their defeat and near-extermination in 1234.

Mackay was a prominent member of a clique of British historians characterized by their anti-Catholicism, so his telling requires some adjustment, but his biases do bring out the relevant part of his narrative.  The archbishop and count with whom the Stedinger were in conflict could not raise sufficient forces to overcome the peasants’ desire for freedom.  Other nobles in the region appear to have been reluctant to get involved until the pope (after a two-year investigation that Mackay waves away by writing only that he “entered cordially into the cause”) amplified the spiritual allegations:

“The Stedinger,” said his holiness, “seduced by the devil, have abjured all the laws of God and man, slandered the Church, insulted the holy sacraments, consulted witches to raise evil spirits, shed blood like water, taken the lives of priests, and concocted an infernal scheme to propagate the worship of the devil, whom they adore under the name of Asmodi. The devil appears to them in different shapes,–sometimes as a goose or a duck, and at others in the figure of a pale black-eyed youth, with a melancholy aspect, whose embrace fills their hearts with eternal hatred against the holy Church of Christ. This devil presides at their sabbaths, when they all kiss him and dance around him. He then envelopes them in total darkness, and they all, male and female, give themselves up to the grossest and most disgusting debauchery.” (p. 231)

This allegation brought the the German emperor, multiple bishops, and other nobles into the fight for a decisive victory.

Some of their antagonists referred to the Stedinger as “bestie” (beasts), and their position was similar to ours — we who are now called “deplorables.”  We have held documented recognition of our rights for more than two centuries, and the powerful interests who seek to expand the reach of their self-serving and rigid social system seek to invalidate our claims on the grounds that we use our freedom so as to harm others.

A millennium ago, the unanswerable accusation was of witchcraft; now it is of white supremacy.  They were said to adore the devil under the name of Asmodi; our supposed devil’s name changes as circumstances require, but it is currently “Trump.”  The institutional strongholds with whom we have come in conflict — largely academia and the Democrat Party — have sent out their cultural preachers in the entertainment and news media and brought other elite institutions, notably corporations, into the fight.

One important difference is that we are not concentrated geographically, nor are we limited by Medieval technology.  Another is that we don’t (yet) have to defend ourselves with military force but can still achieve victory by standing firm and speaking out, realizing that rhetorical bullets of truth don’t actually ricochet, even if our opposition has a remarkable ability to pretend that they do while also pretending that their false projectiles draw blood.