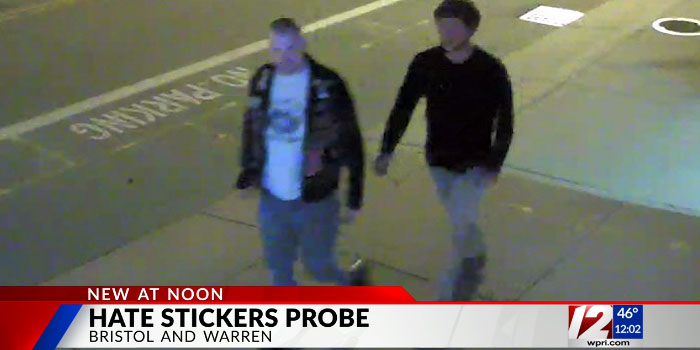 Without a sense of proportion, free expression is easily lost.

Maybe it’s evidence that I’m a creature from another age (if not another dimension), but I find news reports like this one out of Bristol disturbing, although probably not for the reason WPRI’s Bay Gammans thought it newsworthy:

Bristol police are asking for the public’s help as they investigate reports of concerning stickers being posted in town.

The first report came in on Saturday, according to police, when a person walking on Hope Street said they saw a sticker with a discriminatory connotation on the window of the Rogers Free Library.

The sticker said “White Boy Summer” and appears to have a photo of Adolf Hitler in the background.

The caller removed the sticker and turned it over to police.

Later that day, police said they received a second report of a concerning sticker on a mailbox outside of the U.S. Post Office on Hope Street. It was identical to the one found at the library, according to police.

The Bristol PD is now coordinating efforts with the Warren PD to determine if there’s any connection with the latter’s hate-sticker incident and has brought in the state attorney general’s office “to review the case as a possible hate crime incident.”

Can we have a reality check, on this?  These are stickers.  They have no text beyond reference to a terrible rap song.  Yes, they constitute dumb, offensive vandalism, although we should note how easily they are apparently removed, so there doesn’t appear any real damage involved, as there would be with graffiti.

However, if the government is judging and prosecuting that sort of vandalism differently based on officers’ judgment of the content, that contradicts the First Amendment in its face.

It also brings the fairness of the entire investigation into question.  For instance, the police say they have “video footage of two possible suspects.”  Looking at the image (which is the featured image for this post), one must wonder why these two are “possible suspects.”

Do the police have a shot of them placing the stickers?  Do they have more pictures they didn’t release showing them in the vicinity of the other locations?  Do they even know when the stickers appeared?

Or is this just racial profiling?  After reviewing hours of surveillance footage, was the guy on the left the only one who looked like the sort who might unironically put up a Hitler-themed sticker?

To be sure, there’s nothing wrong with police in a small suburban town looking into vandalism.  Still, the high profile of these stories and combination with a narrative about white-supremacist infiltration is poison corroding our rights.