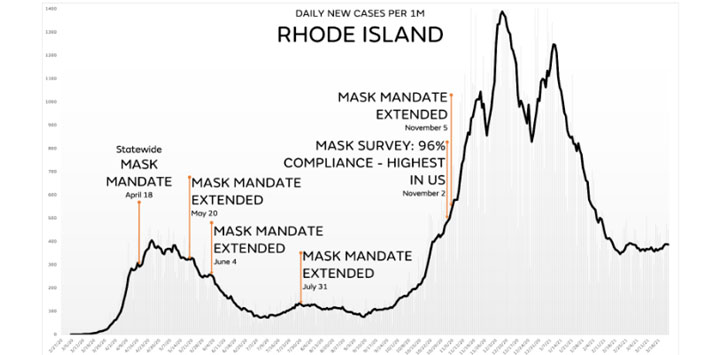 At some point, the masks are going to have to come off.

Dr. Andrew Bostom argues, on behalf of the RI Center for Freedom & Prosperity, that we’ve reached that point.  Actually, he suggests that it was reached long ago (if we should have imposed a mask mandate at all):

… from 2008 through the end of 2020, 12 randomized, controlled trials—the gold standard for judging medical intervention effectiveness—involving some 18,000 persons, including a 6,000 person study with covid-19 infections as the outcome, have EACH FAILED to show community masking reduces the rate of respiratory viral infections. Twenty-four (24) states have lifted, or never had an indoor mask mandate, and ALL have lower per capita covid-19 mortality rates than Rhode Island.

His related chart, shown as the featured image of this post, makes illustrates how little effect the Ocean State’s mask mandate appears to have had.  Of course, one can always argue that things would have been worse, but without evidence, that assertion is more an expression of faith.  Instead, the evidence appears to point in the other direction, as the post argues, “Twenty-four (24) states have lifted, or never had an indoor mask mandate, and ALL have lower per capita covid-19 mortality rates than Rhode Island.”