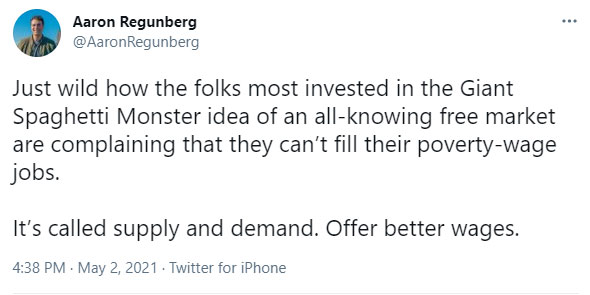 May 3, 2021
Economy | Political Thought | Under the Government's Wing

The government is competing for workers, but paying them as service beneficiaries.

Leave it to Ivy League progressive Aaron Regunberg to stick with the far-left line no matter how clueless or heartless it might seem in the tweet shown as the featured image of this post:

Just wild how the folks most invested in the Giant Spaghetti Monster idea of an all-knowing free market are complaining that they can’t fill their poverty-wage jobs.

True to form, Regunberg just throws that red meat out there for his fellow progressives to snark upon, but if he were to read (for example) Brian Amaral’s Boston Globe article on Rhode Island businesses’ difficulty finding employees, he’d have learned that some of the businesses doing the complaining are paying $15 per hour or more.  The likes of Regunberg (indeed, by Regunberg himself) have told us again and again that $15 is the living wage needed to make work fair.  Is that suddenly “poverty-wage,” or is the well-heeled man of the people just mouthing off?

His lack of empathy is astounding.  Businesses could be doing everything Regunberg supposedly wants them to do, and he’ll still belittle and dehumanize them, because that fits his narrative.  We can’t all be people in a community trying to find ways to work together for the good of all.  It’s got to be the selfish and ignorant business owners exploiting the humble worker… because then somebody’s got to pay Aaron Regunberg to be a hero.

The us versus them narrative also fits Regunberg’s ideology, because to progressives, people building private organizations are competition to government.  Amaral quotes Wilfred Roth, who runs Add Temps staffing agency in Pawtucket, as saying, “When we’re calling people, more often than not, they’re flat out telling you — why would I take this job if I can make this amount collecting [unemployment]?”  In essence, the government is competing with businesses for the time and attention of workers.

Given political trends at the state and national levels, this is going to be a crucial subject to watch.  Although the unemployment insurance boost is (supposedly) temporary and tied to COVID-19, the pandemic has only given us an unexpected insight into where the Left wants us to go.

This is what I’ve called “the company state” (or, more provocatively, “the government plantation”), based on the history of Lawrence, Massachusetts.  Once, the city was essentially a “company town,” in which manufacturers dominated the landscape, often importing workers from other countries.  When economic changes drove the manufacturers out, government began to become the hub of the local economy.  Under that new business model, government imports people (often from other countries) who will be in need of government services, for which agencies then turn around and collect money from taxpayers as well as the state and federal governments.