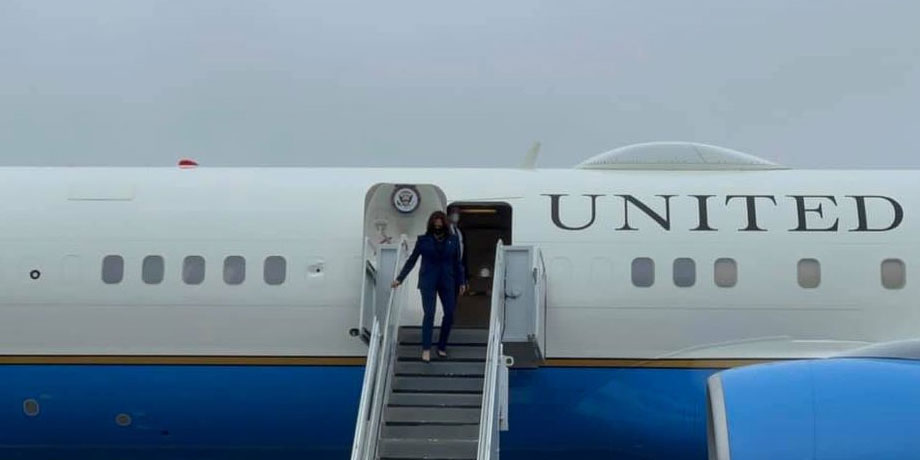 Under RI’s Act on Climate, can I sue Kamala Harris for her strange visit to Rhode Island?

A photo that Governor Dan McKee posted on his Facebook page, shown as the featured image for this post, caught my eye.  That’s an awfully big plane to carry one person hundreds of miles for tarmac handshakes with VIPs, a photo op with some local professionals, and a quick run to a neighborhood bookstore.  How much carbon did Kamala Harris’s little venture emit?  (Kinda weird the climate-threat believers aren’t asking that question.)

Air Force Two is a 757, and when the media types were inclined to criticize the president, they estimated that each 1,000-mile trip of Air Force One emitted 26 tons of CO2.  It’s about 400 miles each way between Washington, D.C., and Rhode Island, so 800 miles of flying would be about 21 tons of carbon now in the atmosphere that wasn’t there twenty-four hours ago.

For reference, the Environmental Protection Agency (EPA) estimates that “a typical passenger vehicle emits about 4.6 metric tons of carbon dioxide per year.”  Thus, Harris’s trip did as much damage to the environment as the typical Rhode Islander’s car does in four-and-a-half years.  Dan McGowan may write glowingly about the value of Harris’s trip to the handful of people who met her, but it would take an awfully low opinion of Rhode Islanders to think nearly a half-decade of their driving isn’t at least as valuable.

Think about that when the Rhode Island General Assembly inevitably votes to impose new gas taxes on you through the Transportation & Climate Initiative (TCI) within the next couple months and when activists start suing state agencies (and probably private companies and individuals) for not meeting bureaucrats’ green goals under the Act on Climate law.

And it sure is weird that I didn’t see a single tweet from the environment-conscious media and activists questioning Harris’s tradeoff.  As the frequent refrain on Instapundit goes, I’ll believe climate change is a crisis when the people who tell me it’s a crisis start acting like it’s a crisis.

Despite being vaccinated, Harris wore a mask for her entire trip, even while kissing her also-vaccinated husband.  (He, by the way, was hopping out of their big black SUV in order to hop into a plane and fly a relatively short distance for another PR jaunt of questionable importance.)  The stated reason for the mask wearing is to model proper behavior to Americans during the COVID crisis.  Of course, it’s a lot easier to put on a one-piece caution costume than to forgo executive jet-setting for PR and political favors.