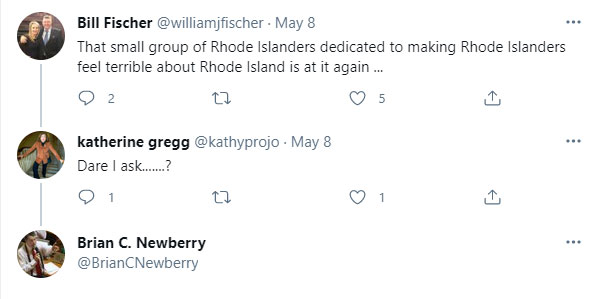 Twitter can be a good place to pick up on RI-insider mutual credulity.

Each instance is a small thing, and especially in a small state, one wants to limit one’s time spent lurking around social media like a sort of contrarian anthropologist.  (Of course, most insiders aren’t on there purely for fun and distraction, but are working angles, too.)

Still this subtle dynamic may be one of the more important influences on how our state operates, so the lessons are important to highlight and explain.

The complaint caught my eye as somebody whom Fischer would probably count as a member of that group, and it immediately struck me as a genre of misdirection.  Naturally, people who are doing quite well swimming in the status quo will see those who criticize that which is bad about the status quo as complaining about them.

The lesson comes with the response of Providence Journal political reporter Katherine Gregg:

Note the implicit credulity.  The tone is that of a person who considers herself to be in the same small group of good and in-the-know people as the other, tired of those naysayers.  Gregg didn’t simply ask for details or use casual but ambiguous phrasing like, “Do tell.”  “Dare I ask” implies knowing sympathy.

So what’s wrong with that?  Republican State Representative Brian Newberry points the way with his reply to Gregg:

Betting some lobbying client of his is being criticized by people whose politics generally don’t align with his anyway. Just a guess. I could be wrong. But some themes repeat themselves.

And yet… in a healthy civic society, a journalist would reflexively doubt the characterization of a well-paid lobbyist whose job it is to put positive spins on things of interest to his clients, leaving open the possibility that such lobbyists are doing plenty to make people feel terrible about the direction of their government.  This is especially true given the imbalance of incentives I mentioned earlier.