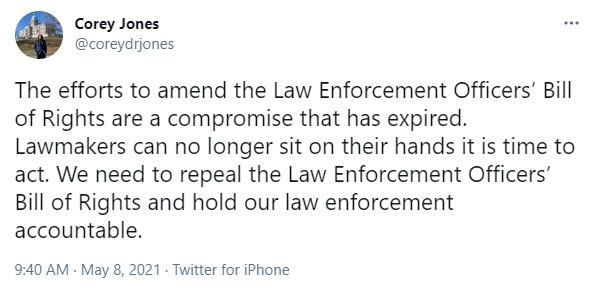 After John DePetro highlighted the tweet shown as the featured image to this post by Corey Jones, the former executive director of BLM New England PAC, I thought I’d check him out on the state’s payroll tool.  To preserve the text, here’s what Corey Jones tweeted:

As Providence Journal political reporter Katherine Gregg asks on Twitter, “Does he represent [the governor’s] view on this issue?

Be that as it may, the annual salary taxpayers provide the just-turned-24-year-old to advise our governor on policy is $58,119 (presumably plus benefits).  I reached out to the governor’s office for some clarity on what it is that a policy advisor does, and here is the response I received:

Corey Jones is a policy advisor to Governor Dan McKee. Among other job functions, he and the other policy advisors review and analyze policy and legislation and work with executive branch agencies in crafting and implementing initiatives related to the Governor’s agenda.

He does not have a contract.

So, the question continues: What policies is Jones tasked with analyzing, and where does the LEOBoR fit into that?

Note, by the way, the Mr. Jones has two Twitter accounts (here and here). It appears that he initially tweeted this message from the one that names him as a McKee policy advisor, not his campaign account.