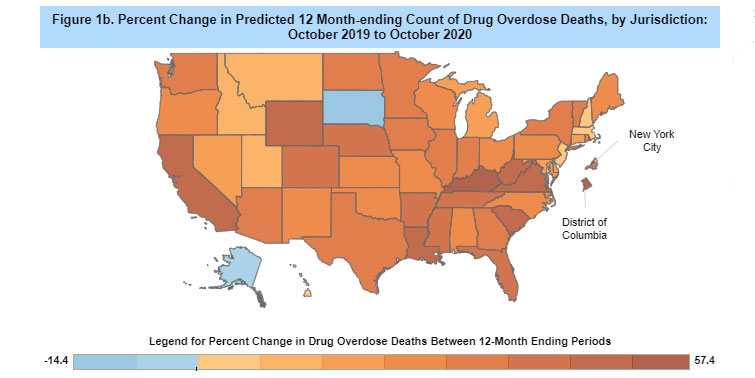 Overdoses were way up during Rhode Island’s lockdown.

As shown on the map that is the featured image for this post, the CDC estimates for overdose deaths show them well past projections for every state except South Dakota and Alaska. Rhode Island’s increase was 21.6%, which translated into an additional 71 deaths.

I’m a little behind posting this data, which has been out there for a little more than a month, but it arguably has a renewed relevance for anybody who shares my predilection for contrarianism.

For a year now, many of us have been arguing that government officials (and their snitching helpers) have been undervaluing the costs of locking down.  The choice isn’t between saving some lives by locking down or killing some people by not.  Our response to COVID-19 will have far-reaching consequences for decades to come; overdoses and suicides are just two of the most immediate and tangible.

The interesting thing is how this point sort of flips on its head when we reach the vaccination stage of the pandemic.  To the extent that one faces restrictions after not being vaccinated or, conversely, just feels less stress once the side-effect window for a vaccine has passed, the direct medical balance of costs and benefits isn’t the only variable in the equation.

What I’m getting at is this:  We’ve been plagued by a myopia that focuses in on only one part of the pandemic and the response thereto, and that isn’t how we should make decisions.  Getting more and more people feeling comfortable taking off their masks, even if they already shouldn’t be scared to do so regardless of the vaccine. has benefits.

So does improving the economy, and any leverage we can manage to force that issue will be to the good.

[…] in overdoses and suicides are only the extreme tips of a much larger problem.  We can bet that they indicate […]