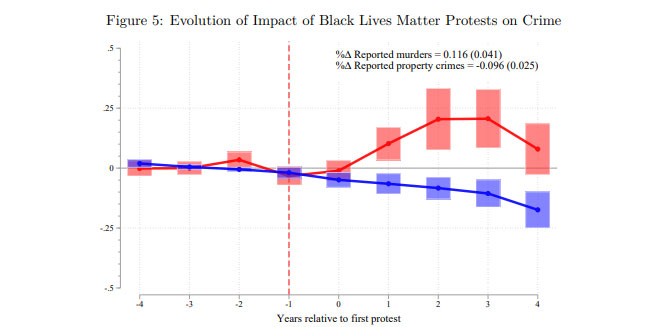 Keith Griffith’s summary for the Daily Mail of a study by Travis Campbell of changes in crime in cities that had Black Lives Matter protests is not surprising in one respect:

A researcher has found that cities that had Black Lives Matter protests saw a significant decrease in police homicides, but a huge overall increase in murders.

Travis Campbell, an economics PhD candidate at the University of Massachusetts, published his findings in a recent pre-print study examining the impact of BLM protests on police use-of-force incidents.

Chaos increased, with an international spotlight on police behavior, so police backed off and criminals had the excuse of aggrievement, increasing murders.  It also isn’t surprising that the clearance rate for property crimes fell.  Again, police backed off.

What is somewhat surprising is that Campbell found that reported property crimes actually decreased in these cities.  In the chart shown as the featured image of this post, the red areas are murders and the blue areas are property crimes.

If that seems counterintuitive, put emphasis on the word, “reported.”  It may be that residents simply didn’t bother reporting crimes, because they knew nothing would come of it (and maybe suspected they’d be targeted again if it did).  Murders (one supposes) are more likely to be reported whatever the expectation of justice.