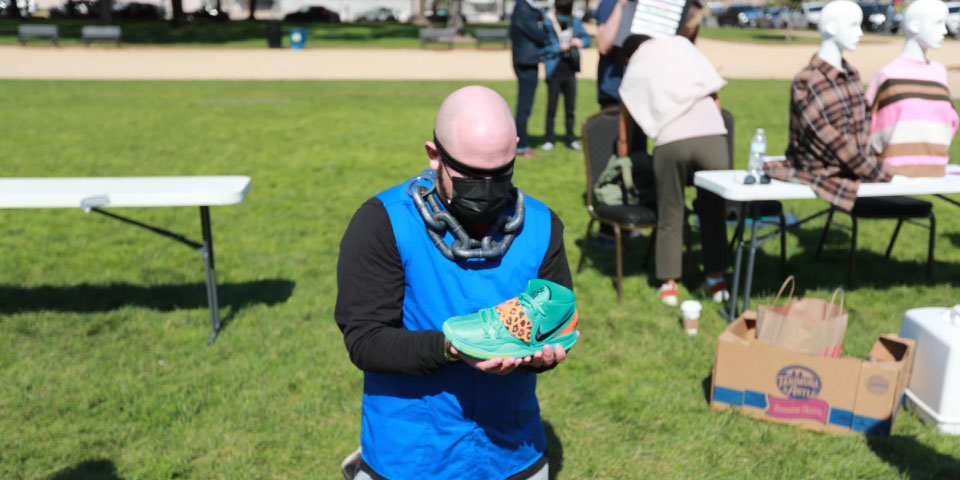 How long until we start hearing the protest chant that “Green Is Slavery”?

What makes this moment in history strange (well, one thing, anyway) is that at the same time we’re hearing of the need to purge and punish every American brand or institution that was at all associated with slavery — like the state name Rhode Island and Providence Plantations, which had nothing to do with Southern slave plantations — things like this are hardly recognized as an issue, with Trevor Marshallsea of The Epoch Times reporting:

British researchers say the world’s production of solar panels is being fueled by forced labor from Uyghur Muslims in the Chinese province of Xinjiang.

An investigation by Sheffield Hallam University says some 45 percent of the world’s supply of a key component in the panels—polysilicon—comes from Xinjiang and is obtained through a vast system of coercion involving the Uyghur ethnic minority.

Featured image (of a man holding a shoe at a Uyghur protest) by Kuzzat Altay.

Something tells me public opinion on solar farms is going to involve a lot of “oops, we shouldn’t have done that.” – Anchor Rising

[…] That is, the Ocean State gets a small short-term employment boost and a mild supplement to existing energy sources, all heavily subsidized by other energy consumers and taxpayers.  Naturally, the energy companies are hoping this was sufficient to prove the value and persuade the state to expand “the pilot program” for more clearing of trees and production of thneeds panels by slaves in China. […]

It’s starting to seem like the solar industry is a gift to the Chinese coal industry… as well as slavers and dictators. – Anchor Rising

[…] That country, in turn, has its own incentives to be a low-cost producer, which means engaging in anti-competitive practices that give it an advantage of its geopolitical adversaries, which it can afford to do because it’s a communist dictatorship.  Because it runs a dictatorship, the Chinese Communist Party is also not averse to gaining economic advantage by enslaving a religious minority. […]