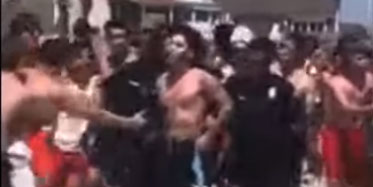 The early beach incidents are not a good sign, although what’s rotten isn’t clear.

A massive gang beach brawl broke out on Narragansett town beach known as the pier on Sunday.  A woman from Cranston was threatened when she asked gang members to lower their music ( as they were blasting WAP by Cardi B.) and watch their language in front of her young children. A man from Warwick was punched after gang members stole his young sons boogey board.  A grandmother from Johnston was pushed down after yelling at gang members who destroyed the sand castle her grandson was building.

This was followed by inter-high-school fights:

There are eye witness reports of boys from LaSalle and Hendricken getting into it, and one Lasalle student punching a cop in the face. Several people report there was underage drinking combined with the first hot day of the summer which led to 8 arrested and then several students throwing things at police.

With a general atmosphere of lawlessness and disrespect:

This past weekend was embarrassing as officers quickly lost control of the crowd on the beach on Sunday as the some in the crowd played a game of gotcha hat with police. Witnesses claim the brazen groups fighting were grabbing the hats off the heads of police and playing a game of keep away( monkey in the middle) from the police. One video had an officer sprinting down the beach after a young girl but was unable to catch her as the crowd laughed.

This reminds me of the year my recently graduated high school friends and I stopped our annual trip to the beach town of Wildwood, New Jersey, on which we’d settled after fleeing from Seaside (of Jersey Shore infamy, and known locally as “Sleazeside”).  I even wrote a song about it (because I wrote songs about everything), called “They’ve Taken Over Wildwood.”  (It wasn’t racial; the thugs were a diverse group.)

To be clear, we were probably a sort of leading edge of the deterioration and had our share of disrespect for authority, but something changed that summer.  One night, people along the crowded balconies of our hotel watched as three kids beat a passer-by and curb-stomped him.  While we were waiting at a jet ski rental place, some other young adults waded out and took off on two of them for a joy ride.

The atmosphere had escalated to a point of danger.

Given the nature of the communities, there shouldn’t be any comparison between Wildwood and Narragansett, so the echo is disturbing.  The question for Rhode Island is whether this is just a little early summer letting off of steam after a year of lockdown or if the sour economy, culture of grievance, and anti-cop attitude are creating something new and lasting.

Featured image from a video posted by John DePetro.

Glad I have a pool for friends and family to enjoy