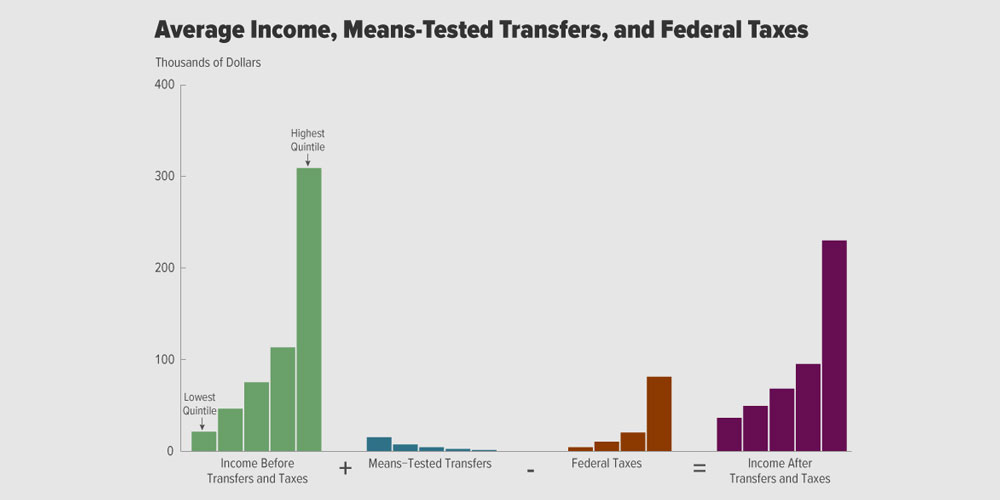 Toes tin-ear Sheldon err in not seeing how it appears when somebody of his wealth and tincture talks like this, or does he correctly assess that his base just wants to hear the sweet, sweet sound of agreement?

Rising inequality is a threat to the American way of life. We shouldn’t have a structure that allows the very wealthiest people who benefit the most from our system to get away with paying so little in taxes.

The first thing to note is the baseless and divisive contention that wealthier people don’t pay much in taxes.  Whitehouse should take a stroll to the Congressional Budget Office, where he’ll find the people who make charts like the one used for the featured image of this post.  When all is said and done, those in the lowest fifth for income wind up getting a 70% boost in their income from the federal government while those in the top quartile lose about a quarter of their income in taxes.  Those in the second quintile also increase their income in the deal, while those in the middle start paying some taxes.

How does that turn into “so little”?  Does Whitehouse want to make sure the people in the middle pay nothing?  Or that the people at the bottom get even more?  Or (most likely) that the government has more money to distribute to cronies so that more of their friends are in the top two quintiles?

The second thing to note comes out of the implicit racial insinuations that linger around progressives’ talk about “inequality.  In all the time I’ve spent with friends of different races and conversations I’ve had with them, the only time I’ve ever actually felt an attitude toward them for which I didn’t have some parallel experience of my own was when, during my carpentry days, a Black coworker and I delivered some clients’ furniture to their cabana at the exclusive Bailey’s Beach club, where Whitehouse is famously a member.

Through my job and those of others, I’ve gotten to know people who work for and/or are members of the club, and they’ve been good people, but really, the idea that Sheldon would take up these talking points suggest that he’s either truly manifesting privilege in not even sensing the atmosphere that surrounds his ilk or he just doesn’t care for cynical reasons.