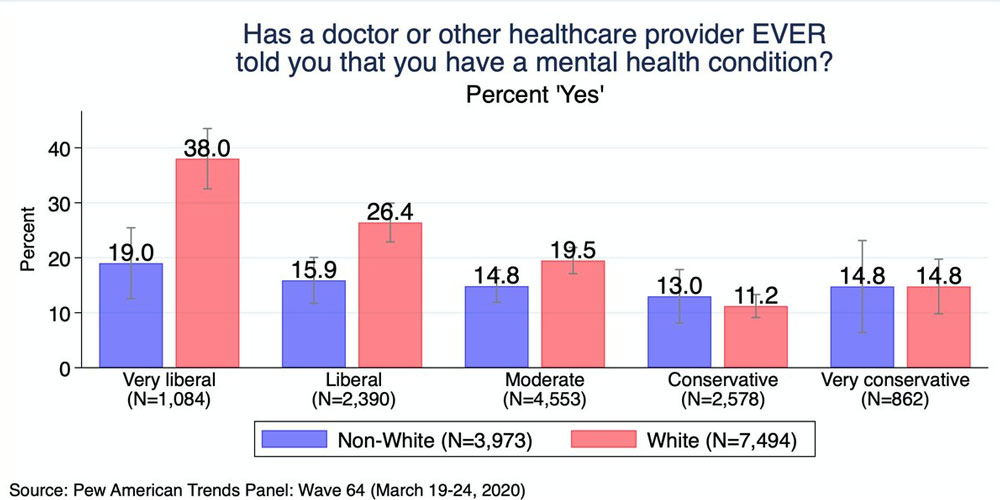 It’s important to acknowledge the correlation between “liberalism” (meaning “progressivism”) and mental illness.

The study, which examined white liberals, moderates, and conservatives, both male and female, found that conservatives were far less likely to be diagnosed with mental health issues than those who identified as either liberal or even “very liberal.” What’s more, white women suffered the worst of all. White women, ages 18-29, who identified as liberal were given a mental health diagnosis from medical professionals at a rate of 56.3%, as compared to 28.4% in moderates and 27.3% in conservatives.

All of the charts, including the one used as the featured image for this post, developed by political science PhD candidate Zach Goldberg, are worth review and point in a particular direction:  young, white, very liberal women are the most likely demographic group to have been diagnosed with a mental health condition.  Interestingly, there is a consistent trendline showing fewer mental health diagnoses as a group becomes more conservative, with a small uptick in the opposite direction when one moves from conservative to very conservative.

Of course, the fact that this trendline is much less pronounced among non-white survey respondents points to an important qualifier: other factors may confound the analysis.  To some extent, the results may be measuring a group’s likelihood to seek a diagnosis.  However, it would be difficult to tease this factor apart from the probability that people tend to seek professional help most often because they sense that they have problems.

A primary selling point about progressivism is that people who espouse it can feel better about themselves because their ideology proclaims an intention to actively solve the world’s problems, whereas a conservative ideology is more nuanced, tending to question whether it’s possible to do that actively, as well as the right of people to define and solve other people’s problems for them.  The progressive approach would be especially attractive to people who think there’s something wrong with them.

On the other hand, progressive policies tend to be divorced from reality, in greater or lesser degree, and to face opposition that their proponents cannot explain except under the assumption that their opposition is evil.  This will naturally increase progressives’ sense of discomfort in the world.

Whatever the case, one can see why issues like “mental health parity” are strong policies for Democrat politicians.