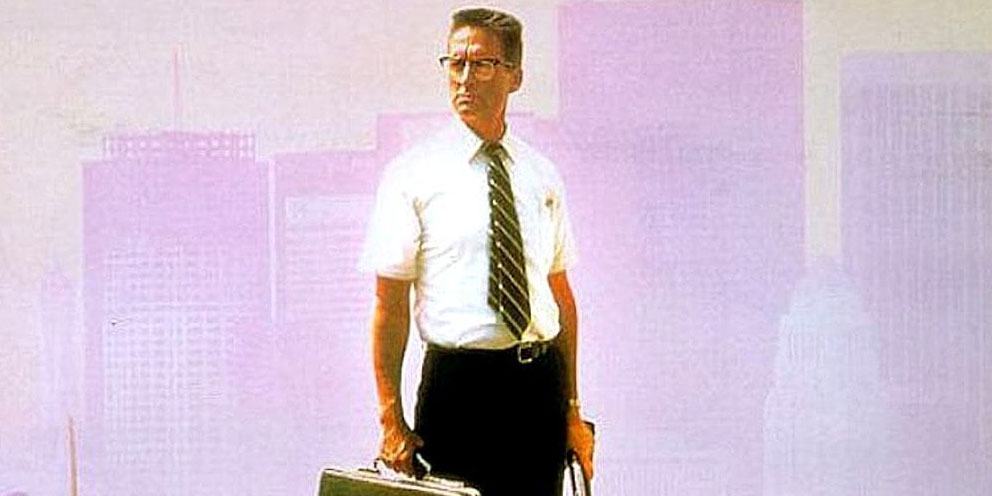 We’re falling down because somebody’s deliberately removing the ground out from under us.

I’ve been thinking about Stacy McCain’s thoughts upon rewatching the classic Michael Douglas movie, Falling Down.

The quick summary of the movie is that Douglas’s character, William Foster, has lost everything.  Unless I’ve forgotten a detail (it’s been a while since I watched it), he didn’t really do anything to deserve it.  Those on whom he depended (in part, to depend on him) simply decided they didn’t need him anymore.

The movie unfolds after he finally snaps in sweltering traffic and decides to walk home.  As he goes along, the world abuses and attacks him in ways both petty and significant, and he escalates from being on a guy on edge to all-out fighting back.  In a way parallel to pieces of backstory that never quite allow an understanding of why his life went wrong, the viewer isn’t really sure whether to root for him or blame him for the things that are happening and to fear him.  (This ambiguity comes to a dramatic resolution at the end.)

Not for no reason does McCain’s mind turn toward “social justice,” about which he writes:

In reality, however, oppression is not neatly distributed according to the identity-politics formulae of the Left. Everybody has their own grievances, and attempts to explain human frustrations by such simplistic labels as “systemic racism” — or “patriarchy” — fail to capture this reality.

His central point, though, is that we’re living in a systemic version of William Foster’s condition, wherein following the rules and being the sorts of people we feel we ought to be doesn’t seem to be keeping the world from turning on us.  I certainly agree, but with an eye toward a way out, I find that McCain may miss something important:

Things are likely to go from bad to worse, and the only question is just how much worse the situation will get. We cannot expect Joe Biden (or the people who are running the government in his name) to experience a sudden insight as to the cause of their failures. There will be no sudden reversal of their “progressive” agenda, and it is far more likely they will just double-down on the bad policies they’ve embraced.

Probably a lot of people aren’t going to be able to cope. We’re going to see more and more people going berserk — seemingly random massacres, “suicide by cop,” acts of domestic terrorism — because what do you expect people to do when the rules don’t work anymore?

The thing is… the people who have done this to us don’t feel as if they are failing.  In Falling Down, Foster fights off some gang members in the hood, who then fail in a drive-by attempt on his life, after which he takes their guns.  Later, he shoots out the wheel of a golf cart when a country club member screams at him to get off their gated course.  To the gang members and the rich folks, the system is working; it’s only somebody who wishes to walk a straight line across their respective turfs who sees the failure.

That’s a key point as we seek a solution to the deterioration of our society.  To survive, our system has to be rational and group oriented; the challenge is bringing those virtues back into favor without returning to the stultifying restrictions against which the modern world is still rebelling.

Featured image from promotional materials for Falling Down.