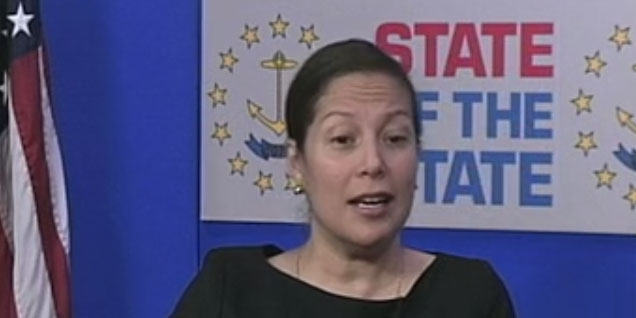 The education commissioner should go after the teachers unions for the right reasons.

I’m with Rhode Island Education Commissioner Angélica Infante-Green in believing that negotiating teacher contracts should be a professional endeavor of well-meaning parties and that professional union organizers prevent that from being the case when they aren’t getting their way.  Indeed, from the early months after her arrival in the state, I’ve been saying Infante-Green was being naïve and losing valuable momentum by trying to play nice with the union in Providence.

But this, from Sarah Doiron’s reporting for WPRI, is off base:

Infante-Green’s senior adviser Victor Capellan earlier this week circulated a text message denouncing what he said were attacks from the Providence Teachers Union.

“I can no longer stand by and watch as one of our Latina leaders, a woman of color, is taken down publicly by vicious attacks, racist commentary and just overall mean spirited character assassination,” Capellan wrote. “If people disagree with the how she is doing the work, I can respect that, but the manner in which they are referring to her and demeaning her is completely unacceptable.”

He referenced the “latest attack,” a now-deleted Twitter account with the username “AnHÉLLica,” apparently mocking her first name.

“Personal attacks? On my name? My accent? It’s not OK,” Infante-Green said during a meeting of the state’s Council on Elementary and Secondary Education. “I look like the kids that we are failing. It is not OK.”

The complaint, as enunciated by Providence NAACP Director Jim Vincent, is that the term “carpet bagger” has been applied to her, and somebody set up a fake Twitter account with the name “AnHÉLLica.”

These attacks are most definitely not the worst that public officials whom Rhode Island’s teachers unions have targeted have experienced, and the racial component is vanishingly small.  The term, “carpet bagger,” has become so common in modern usage that any racial undertone that ever existed (if there was one) has long since evaporated.  As for the accent in the childish wordplay on her name, well, the fact is that she applies the accent to her actual first name.  If she didn’t use the accent in her name, one might possibly be able to argue that its introduction into the wordplay was a somewhat racist attempt to degentrify her (or something), but that isn’t the case.

Public officials shouldn’t be immune to the same sorts of criticisms and insults that others are just because of their skin color or ethnicity.

As usual, identity politics is a distraction, which is why the strongest part of Infante-Green’s response was that she “look[s] like the kids that we are failing.”  That’s the real point: while the teachers allow themselves to be represented by bullies and Alinskyites, graduating class after graduating class of Providence students are suffering.

Featured image of Angélica Infante-Green from State of the State on 9/9/19.