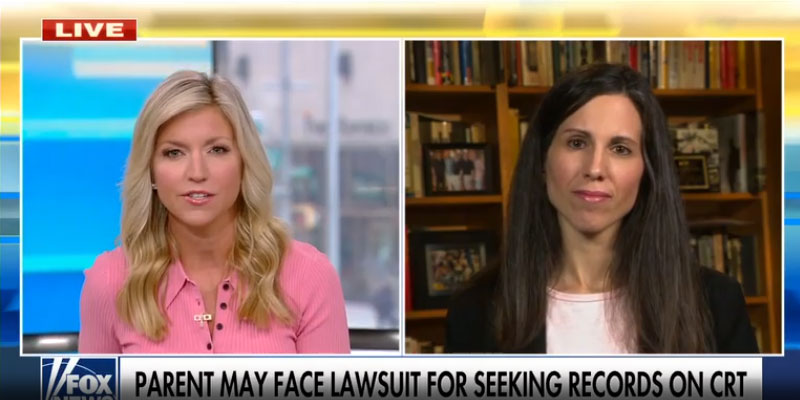 For twenty minutes of your time, Tara Granahan’s WPRO interview with the South Kingstown mother whom the local school committee nearly sued to stop her from seeking information about their ideological curriculum provides a short lesson in how Rhode Island insiders think.

PODCAST: The @TaraGranahan interview with Nicole Solas that everyone is talking about: https://t.co/ci0kpITtTG

The entire interview becomes derailed when Granahan, apparently smelling some sort of scheme because Solas doesn’t think she should be the issue, drives hard at a supposed mystery of the process by which Solas wound up on Fox News so quickly.  (This, in itself, is a classic paradox in our divided nation, where we all live in completely separate realities:  The fact that she is not a self-promoting activist is taken as evidence that she’s hiding something, because she’s a self-promoting activist.)

What Granahan displays most conspicuously is how narrow her awareness of the media and political landscape is.  She’s not alone in this, of course; it plagues our whole local market — arguably the mainstream media throughout the nation.

At the center of the question is the long-running Legal Insurrection blog, which is operated by Cornell University law professor and Barrington resident William Jacobson.  Jacobson, himself, was on Fox News a few months ago when the foundation he started introduced CriticalRace.org to track the infiltration of Critical Race Theory into schools.

With that bit of knowledge, there should be no mystery about how Solas wound up on Fox.  Anybody searching for information about CRT in schools would predictable come across Jacobson’s website.  She probably reached out to the Legal Insurrection Foundation with her story, and Jacobson invited her to write about it on his site.

Granahan expresses surprise that Solas’s path to Fox News didn’t involve prior stories in any of the local news, but that misses two facts that ought to be obvious outside of the local media bubble.  First, Legal Insurrection’s line to Fox News is surely much more direct than any local outlet (which would probably have to be picked up nationally, somewhere, first).  Second, local outlets would be reluctant to cover the story for the same reason Granahan tried to make it about Solas:  local journalists view people who oppose the march of the progressives as suspect and often kookie.

Because the issue of racial indoctrination in the schools is hot right now, and because the South Kingstown school committee went so far as to put a lawsuit against Solas (by name) on its agenda, and because Legal Insurrection is already part of the CRT public debate, the story took off.  There’s no mystery, and the insinuation that Solas must have had the backing of a national activist organization shows how completely the corrupt establishment in Rhode Island has seeded the public square with landmines to prevent the people from mounting any opposition.

Solas’s story is encouraging as exactly the way we hope this all will work.  Entirely out of interest in a particular issue and its effect on her family, she sought transparency from a government agency.  When that agency attempted to bully her into stopping, people began to take an interest, and the spotlight has been forcing the cockroaches to scatter.  To her credit, she’s actively trying to keep the spotlight on them, rather than herself.  What the insiders see, instead, is some troublemaking activist, probably at the instigation of a shadowy national organization, bringing a distant agenda to harm her nice, friendly local school district.

Two hours ago Tara made a FB posting thanking everyone for listening to and sharing the podcast which is “shattering records”. Once again spinning. About 33 years ago I was a high school student practically running a very small local radio station in West Warwick. The new owners brought in recent college grad Tara to replace me. At least I have my principles and self respect all these years later.

I saw that post. Makes me laugh. A couple months ago, I replied to a tweet from her, and she got all huffy, saying I was “glomming on” to her celebrity by starting a conversation. Kind of seems she’s glomming on to Nicole Solas’s star, at the moment.

Interesting bit of history about the West Warwick radio station!