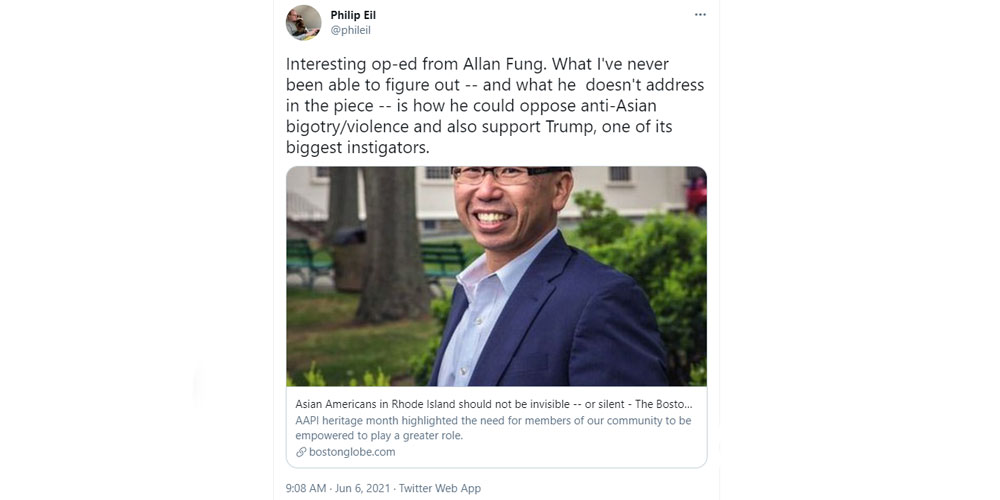 Phil Eil should be honest about the nature of anti-Asian bias.

Phil Eil is a freelance writer and former political editor for the Providence Phoenix, and his response to a recent op-ed by former Republican Cranston Mayor Allan Fung in the Boston Globe is strangely political and bitter:

Interesting op-ed from Allan Fung. What I’ve never been able to figure out — and what he doesn’t address in the piece — is how he could oppose anti-Asian bigotry/violence and also support Trump, one of its biggest instigators.

Maybe Fung didn’t address that question because the issue he’s raising is so much broader than that.  What Eil finds “interesting” about Allan Fung’s op-ed is that he doesn’t diverge from its theme of a pervasive cultural attitude in order to make a white man its focal point.

Moreover, maybe Fung left that aside because Eil’s premise is simply false.  Violence against Asians is mainly being perpetrated by non-white assailants. Separately, systemic anti-Asian bias is most prominent among progressive institutions, such as Ivy League colleges.  The question should be how anyone who opposes anti-Asian bigotry could be a Democrat or progressive.  Note this from Fung’s op-ed:

Former New England Patriot and NFL assistant coach Eugene Chung was appallingly told during an interview for a head coaching job that, “You’re not the right minority we’re looking for,” and, “you’re not really a minority.”

The claim that President Trump’s calling COVID-19 the “China virus” is an interesting case, because it points to the proud (systemic) racism of progressives, who cannot distinguish between individual people and a country from which their ancestors may have come to the United States.  To the Left, Asians (all minorities, really) can never truly be Americans because they are always defined by their ancestral origins — e.g., “African Americans.”

If you look a certain way, progressives think you must feel the same as and be spiritually linked with everybody else who looks like you.  Thus, they implicitly insist that we cannot blame the Chinese Communist Party for the Wuhan-originating pandemic because then all American Chinese must share in the blame; since that’s obviously wrong, they believe that the Communists can’t be at fault.  This is the pure, ignorant racism that we’ve rightly learned to malign in the past, only now it’s been repackaged with the spin of “we dehumanize them because we’re nice and we love them!”

This article is spot on. Here is a broader perspective from a national point of view: Why, all of the sudden, is there Asian hate in America? Here is the answer: https://www.anticorporatism.com/why-all-of-the-sudden-is-there-asian-hate-in-america-here-is-the-answer/

Some good points, there. Demand for racism is higher than supply, combines in harmful ways with the true systemic racism, which is progressive in nature.