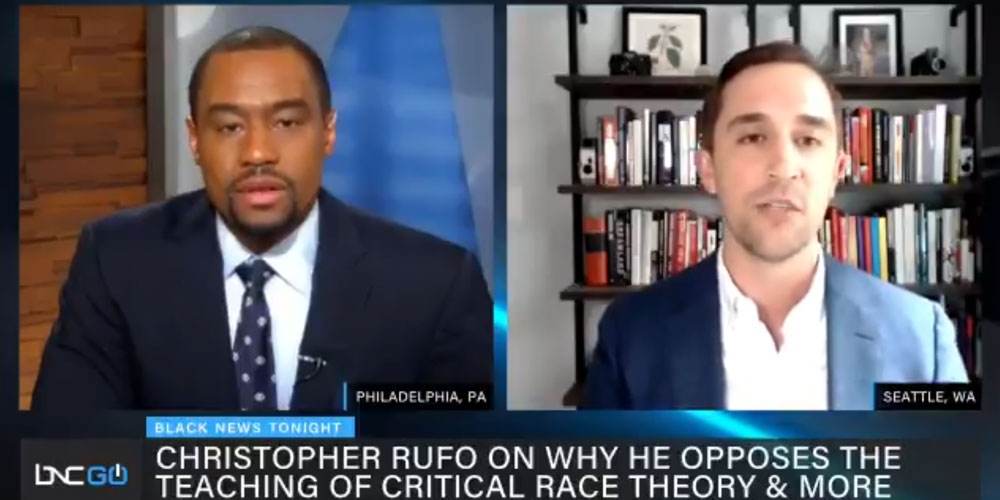 “What do you like about being white?” Lamont Hill asked Rufo, after stating that “whiteness” is a “marker of power.”

Rufo rejected the premise, noting that “whiteness” is “such an amorphous term, it’s like a census term.”

“You surely recognize that the world sees you as white, the world reads you as white,” Lamont Hill said, noting that he likes the “culture norms” and “tradition” and other aspects of “being black.”

“If you’re saying whiteness is being constructed as negative and it shouldn’t be, name something positive that you like about being white,” the host again asked Rufo.

Both Lamont Hill and Rufo obviously know that this is a rhetorical trap.  It’s a cheap debater’s trick, but with cancel culture swamping our society, we’re reaching the point that it’s almost a dystopian gameshow version of a debate competition that can cost you your livelihood.

One way out of the trap is to just refuse to acknowledge the phony categories, as Rufo does, but we need to find better ways of responding that have more persuasive power and expose the trick.

One thing we could try if in this situation is to flip it and put the other person in the trap: “OK.  What specifically do you like about “blackness”?  Lamont Hill opened this door with his vague reference to the “cultural norms” around “being black.”

In other words, instead of taking Rufo’s approach of refusing to play the game, you can insist that the person who wants to play it make the first move.  He or she will have three options.  The first is to name things that apply to everybody, which allows for either a contentious response (“Are you saying white, Hispanic, Asian people can’t be…?”) or an empathetic response (“We have that in common, because that’s strong in my cultural heritage, too!”).

The second option would be for the person to create fictional categories or qualities, like saying that people of color are not oppressors.  This allows for exposure of the falsehood (“What about African slave holders? Were they not Black?”).

The third option is for the person to refuse to answer the question him- or herself, which effectively disarms the trap.