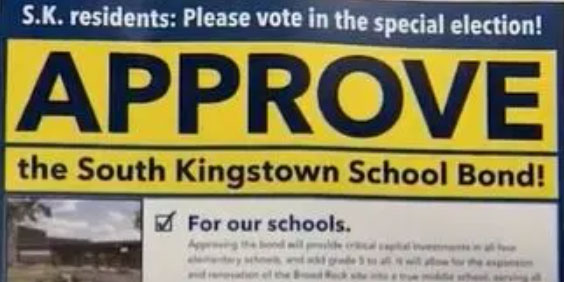 Nearly twenty years ago in Tiverton, when it became clear the school department was using taxpayer resources to advocate for budget increases at our financial town meetings, we amended our charter to forbid that sort of activity.  It looks like folks in South Kingstown should do something similar now that (at least some of) the steps by which students’ contact information got into the hands of the AFL-CIO are known.  Sarah Doiron reports for WPRI:

South Kingstown Superintendent Linda Savastano is apologizing after she said she realized she was the one who provided students’ addresses used for a highly controversial political mailer earlier this year.

The mailers, which were funded by the Rhode Island AFL-CIO, supported an $85 million school infrastructure bond and were addressed to South Kingstown students, nearly all of whom were under 18 years old. …

In a statement posted to the school department’s Facebook page, Savastano said she received a request from Stacey Bodziony, a board member for the Friends of South Kingstown schools for student directory information.

The Friends group has removed Bodziony from its board and the superintendent is making contrite noises about needing a better policy for the handling of private student information (presumably because she can’t trust herself to use her own judgment).  But parents and residents shouldn’t count on this contrition’s making a lasting impression.  Both those within the school department and parents have incentive to seek more money for the benefit of themselves and their children, and in the thick of political battles, it’s easy for them to let the rules slide.  “Should we do this” slips into “can we get away with it this time.”

The Friends of South Kingstown Schools website includes a request for donations, and as a ballot question advocate, the group must file reports with the state.  Those filings are not as easy to find as political action committees, but browsing through the “other filings” on the state’s campaign finance website, it appears the group collected $29,144.60, with $19,135.10 from Progress RI.  That organization is basically a political front for Rhode Island labor unions, particularly the National Education Association and involves itself with local elections around the state.  In Tiverton, its mailers had the return address of a local teacher who lives in town.

As detailed in a report I published a few years ago for the RI Center for Freedom & Prosperity (page 4), Progress RI is run by Guy Dufault, whose son, Brad Dufault, orchestrated the controversial mailers that went to students. Brad Dufault’s company, Checkmate Consulting, also owns the property on which Progress RI is housed and is also run by NEA employee Raymond Sullivan.

It is significant, then, that nearly 90% of expenditures from Friends of South Kingstown Schools, $26,059.71, went to Checkmate. This also raises a question about how truthful the Friends group is being when it claims that “any and all mailings that were directly sent by FoSKS were sent using publicly available lists of registered voters provided to our group by the SK Town Clerk and the RI Board of Elections.”

Resisting the schemes of this statewide union machine is a massive challenge for volunteer residents who either work or are trying to enjoy retirement, so it’s important to create some unmovable barriers.  A good place to start is to amend the town’s charter to limit the insiders’ massive advantage by forbidding the use of school resources (including contact lists) for political purposes.

A step in the right direction on campaiging via school lists. – Anchor Rising

[…] I suggested yesterday, communities should address locally, right in their home rule […]

A step in the right direction on campaigning via school lists. – Anchor Rising

[…] I suggested yesterday, communities should address locally, right in their home rule […]

[…] Association organizer who was on the school committee have all resigned.  These are added to the ouster of Stacey Bodziony from the board of the local Friends of South Kingstown Schools organization […]