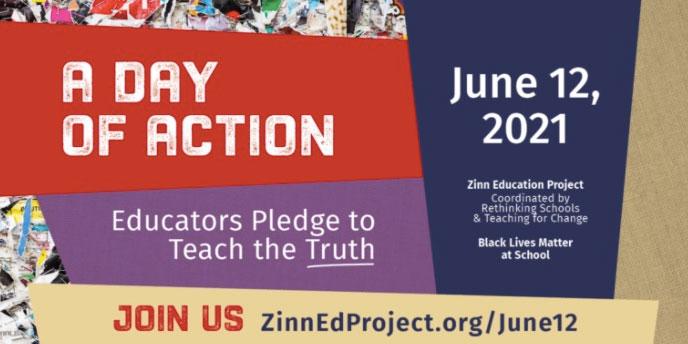 As usual, the Left scandalizes on the Right what the Left is actually doing.

For a week or so, the big political scandal in Rhode Island involved government officials, journalists, and a talk radio host questioning whether South Kingstown mother Nicole Solas was in league with some national organization on the issue of Critical Race Theory (CRT).  The evidence suggests that she was not, but look how differently left-wing advocates are treated on the same issue.  This is from Brittany Schaefer of WPRI:

Dozens of people gathered in downtown Bristol on Saturday for a Teach the Truth Rally, part of a national call by the Zinn Education Project.

“As an educator I will not whitewash our history,” Providence educator Emily Abedon said.

Many speakers are educators from across the state, who believe the role of racism, sexism, heterosexism, and oppression throughout U.S. history should be taught.

What might it mean for this to be “part of a national call by the Zinn Education Project”?  Were these Rhode Islanders merely self-organizing, having seen a suggestion they liked from a national group?

The College Fix has a bit more information:

Across various U.S. cities today, progressive educators are holding rallies to pledge to “teach the truth” about United States history. …

The Zinn Education Project, run by the non-profits Rethinking Schools and Teaching for Change, is named after Howard Zinn, author of the history text “A People’s History of the United States.” According to its website, the ZEP offers “free, downloadable lessons” based on Zinn’s book.

Moreover, the “dozens of people” at the Bristol rally do not appear all to be merely interested citizens, like Solas.  Paul Pasaba of Blackstone Academy Charter School, for example, “worked for several years in the non-profit sector as Director of Education and Organizing for the Providence Youth Student Movement.”  Emily Abedon, who currently teaches at the $56,000-per-year Wheeler School, is as much an activist as a teacher.  From her LinkedIn page:

Emily has designed and led antiracism affinity groups for white-identifying educators and facilitated cross-racial dialogues in a wide variety of organizational settings. Emily has presented at many national and local conferences around culturally responsive educational practices, anti-racism and equity. She has taught for over a decade in public and independent schools. Emily has her Masters of Science in Education through Brooklyn College and was a NYC Teaching Fellow. She is a graduate of the University of Rhode Island’s Center for Peace and Nonviolence. She is a member of the antiracism group White Noise Collective that works at the intersection of whiteness and gender oppression and organizes with Showing Up for Racial Justice RI.

This is all fine, of course; a bedrock principle of the United States is that people should be able to work toward the sort of society in which they want to live.  Still, the average news consumer is apt to get the impression that people exercising that right on the conservative side are activists doing the work of distant special interests while progressives are acting out of pure, self-directed motives, when the opposite tends to be closer to the truth.