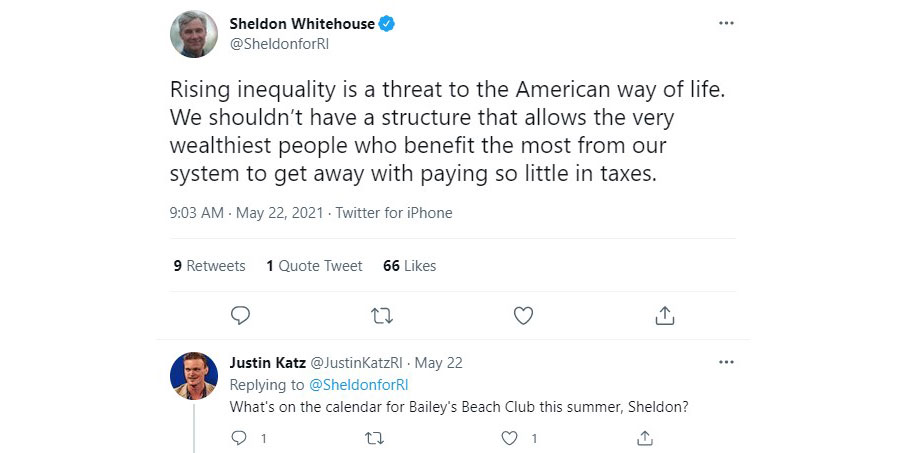 With GoLocalProv getting attention for having turned the spotlight on progressive Democrat U.S. Senator Sheldon Whitehouse for his (allegedly) all-white beach club membership, somebody reminded me earlier today of a tweet I’d directed at him on May 22 (shown in the featured image for this post).

He’d written, “Rising inequality is a threat to the American way of life. We shouldn’t have a structure that allows the very wealthiest people who benefit the most from our system to get away with paying so little in taxes.”  To which, I asked, “What’s on the calendar for Bailey’s Beach Club this summer, Sheldon?”

To make the point clear, Spouting Rock Beach Association, which is the official name for Bailey’s is, in fact, a non-profit corporation. This designation protects the club’s ultra-rich members from having to pay higher dues to cover taxes.  I say that’s fine, but I’m not the one condemning “our system.”

Watching a parade of progressives and Democrats step forward in the news and on social media to vouch for Whitehouse’s creds, I thought of Rashard Turner, a Minnesota Black Lives Matter chapter founder who publicly denounced the organization a few weeks ago:

“BLM has been co-opted, and when I say co-opted, I mean, teachers unions who show up to these woke BLM marches, they have their signs, you might see the sign in their yard that says ‘Black Lives Matter,’” Turner said. “But Monday through Friday, teachers unions are killing our children’s hopes and dreams. So if we’re talking about propaganda, we need to be looking at the teachers unions, and the sick mess that they’re putting out there that’s keeping our children out of schools these past couple of years, keeping the masks on our children. We need to unmask the illiteracy machine that is here in Minnesota with our education system.”

“Illiteracy machine” might as well be another name for the progressive Democrat machine.  It is about power, not progress for people.  That’s why the excuses for Whitehouse generally emphasize that he’s an important part of their team.  That’s why, according to John DePetro, there’s talk of ushering Whitehouse defender Keith Stokes into a membership at the club.

Painful soul-searching is for regular, workaday Americans.  Progressives are supposed to get to play by a more reasonable standard.