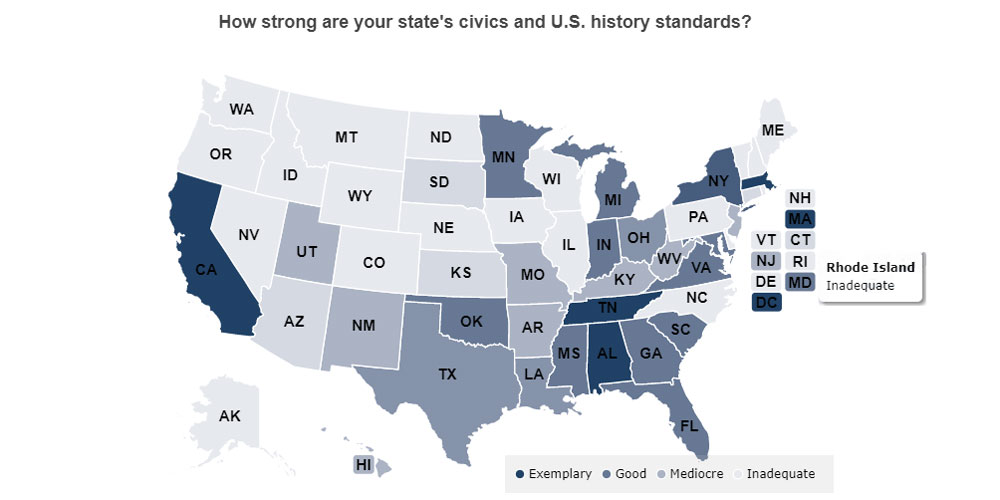 As Rhode Island’s progressive and education establishments go to war with parents over their plan to indoctrinate children with critical race theory (CRT), a study by the Thomas B. Fordham Institute gives Rhode Island a D for civics and an F for U.S. History, with five pages of blistering analysis, summarized thus:

Rhode Island’s civics and U.S. History standards are inadequate. Bad organization and vague and repetitive indicators lead to a dearth of specific civics content, and there is no U.S. History whatsoever. A complete revision is recommended before implementation. …

Although there are a few bright spots, many of Rhode Island’s civics standards are too broad and vague to provide much useful guidance—and their organization leaves much to be desired. …

Rhode Island provides no U.S. History standards. Instead, the state explains that “it is expected that local social studies curriculum frameworks would also include other strands, such as culture, world history, and U.S. History.” By focusing only on broad and often vague “big ideas,” the state abdicates its role in specifying core content.

The text of the analysis has a strong tone of frustrated disbelief at how bad the standards are, leaving the reader with the impression that the person tasked with writing the standards pocketed the paycheck and phoned it in.  Or maybe the problem is ideological — leaving plenty of room to turn civics and history education into an indoctrination opportunity.

That possibility brings us back to the current fight over CRT.  The only defense for pushing it into schools (which is generally dishonest, if not ignorant, in my view) is that it offers an honest corrective to the standard historical narrative.  The problem is that students aren’t necessarily receiving the standard narrative.

The supposed corrective isn’t correcting anything; it’s potentially the only lesson given.  It’s not an addendum, but the entire book.

Turning students into trend-following activists is not evidence of civics “proficiency.” – Anchor Rising

[…] the requirement.  Meanwhile, this legislation would do nothing to remedy Rhode Island’s statewide F in the teaching of civics and U.S. […]