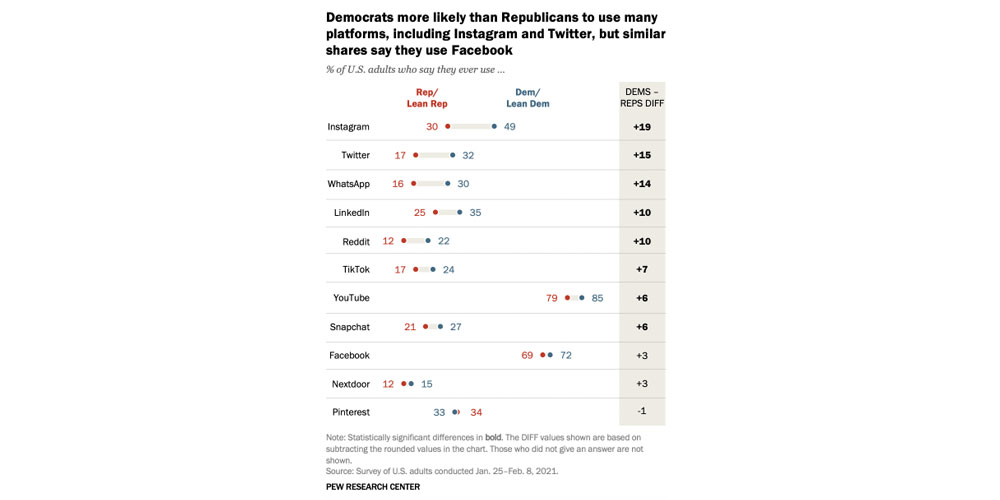 Twitter is essentially enemy territory for conservatives, which is good because its ethos is contrary to our approach.

Brien Riedle recently tweeted some info from Pew Research that conservatives (or just non-radicals) should keep in mind.  Overall Twitter users skew Democrat so heavily it would be tied with Hawaii and Vermont as the most liberal state.  But the most active Twitter users (producing 92% of all tweets) are so skewed that they would be the second-m0st-liberal House district.

Organizations should take this information to heart.  Reacting to tweet storms as if they represent something more than a cranky tenth is a recipe for bad decisions.  Individuals, too, should keep it in mind.  If it feels like everybody on Twitter is against you… they probably are.  But you might as well walk into a coffee shop in the most liberal place in America with a MAGA hat.

Pew has other interesting information, too.  As much as we might hate it, Facebook remains huge, and its users skew only a little Left, so conservatives can’t just ignore it.  That’s part of what makes its censorship a much bigger problem.

However, Americans don’t generally trust Facebook as a source of news, by which they probably mean political news.  Anecdotally, I’ve found that Facebook’s big numbers are not based on politics.  It’s about connecting with people — specifically, family and friends and once-were-friends — socially.

That has implications for message delivery.  You’ll find conservatives there, but very often, they’re not on the site for politics.  That should, one, affect how advocates message to them and, two, change the nature of the “call to action,” as the jargon goes.  Put in terms of local politics, Facebook is like the sidelines at the youth soccer game.  Gossip about people in town government can be very (even unfairly) effective, but if somebody came by with a petition, it would feel out of place.

For conservatives and people with integrity, that shouldn’t be taken as a hint to sneak your politics into your posts, or reframe things as gossip, but rather as a reason to rethink social networking more broadly.  About a decade ago, researchers found that online communications only accounted for about 7% of all word-of-mouth influencing.  Having launched the Ocean State Current around that time and essentially relaunching Anchor Rising this year, I can testify that the online percentage has almost certainly grown by a lot.

The point is one of approach.  Conservatives, of all people, should see the flaws in looking for quick hits and an easy, automated mass-audience approach.  Maybe that’s why Twitter is a thing of the Left.

We need to build relationships and connect with people in fundamental ways.  Sure, posts or videos that go viral can do that, and of course information technology can help with the spread of information, but it isn’t about the platform; it’s about the content.  It’s about meaning.