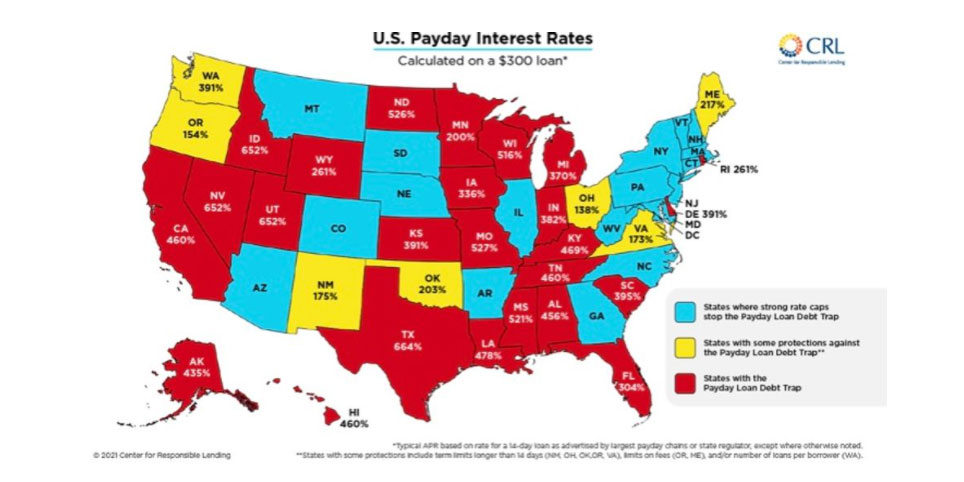 Beware overconfidence that the morality of issues like payday lending is obvious.

The map used for the featured image of this post comes from an article by Ian Donnis for The Public’s Radio titled, “As some states clamp down, Rhode Island still embraces payday lending with the equivalent of a triple-digit interest rate.”

The implied opinion behind the headline pretty well sums up the framing of the issue for the past decade or so.  Donnis is one of the most balanced journalists in the Rhode Island market, but the intended storyline is clear on this one:

So, Donnis reports that payday-lending company Advance America “pays a former House speaker, William Murphy, $30,000 a year to represent its interests.”  However, when we learn about a competitive lower-interest lending company, the Capital Good Fund, Donnis presents it as the product of “a social entrepreneurship class at Brown University” with the mission to help “people to climb out of poverty.”  Its CEO, Andrew Posner, and General Treasurer Seth Magaziner regularly testify together in favor of legislation to restrict payday lending.

Left out of the picture, though, is that Posner’s compensation as the Capital Good Fund’s CEO is just shy of $90,000 and that he has contributed $2,400 to Magaziner’s political career.

Financial self-interest isn’t the only aspect of the payday lending issue that has two sides.  Advocates can pin the term “predatory” on the lending practice, but the fact is that it obviously fills a need that people have.  If government steps in and limits the interest that lenders can charge very-high-risk borrowers, they’ll have to reduce the amount of risk they can accept.  What then will people in need of quick cash do?  They’re not going to do nothing.

The folks at the Capital Good Fund can complain about the difficulty of getting word out about their product, but that doesn’t change the reality that the word is not out.  Even if the word were out, the high-risk nature of the borrowers means that the fund’s ability to help may be quickly swamped by losses.  Either way, eliminating payday lending could lead to even more harmful actions by desperate people.

Donnis tells the curious story of Vannessa Ramirez, who took out a payday loan even though she worked for the Capital Good Fund.

“What ends up happening is that most people don’t understand how the interest and fees will impact you,” Ramirez said. “In a moment of desperation, you think, ok, I need to get this done. In my situation, I couldn’t be in a home without electric and gas, so I did this to resolve that, but then I wouldn’t have enough money to pay my rent or buy food, so it just made things a lot more difficult.”

The unasked question is what the next plan would have been in that moment if payday lending hadn’t been available.

Advocates themselves can’t say, which points to the suggestion that a better approach that will create fewer pitfalls for vulnerable people is to lift them up with an improved economy while educating them about the options that exist, rather than using government to pull the rug out from under them.