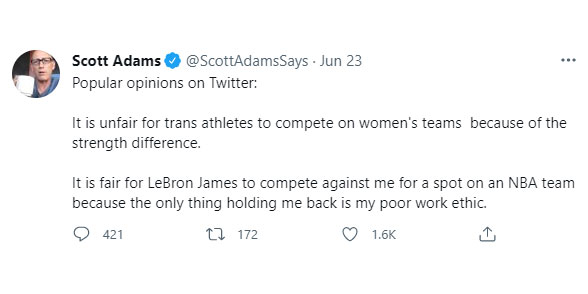 We need to formulate rules for when to engage, and when not to engage, opposing ideas.

The tweet by Dilbert cartoonist Scott Adams appearing as the featured image for this post is deliberately provocative in the real meaning of that word, as in “intended to provoke”:

It is unfair for trans athletes to compete on women’s teams because of the strength difference.

It is fair for LeBron James to compete against me for a spot on an NBA team because the only thing holding me back is my poor work ethic.

Adams got what he wanted.  A couple weeks later, and the tweet has 421 comments, 172 retweets, and 1,600 likes.  He engaged some of the commenters with answers he appears to have developed beforehand, and he promotes an episode of his podcast.  I’ll confess to having commented to a comment on his tweet, but I ultimately concluded that he was basically trolling.

To engage such arguments is, in a sense, to have already lost them.  The person who makes the proposition is obviously not amenable to persuasion, so no case can be made. It’s ultimately a power play, not a debate.  As indicated in the previous paragraph, the odds are the person is just trying to get attention for some other purpose (e.g., promote a podcast).

Yet, as much as we should not spend our time giving trolls exactly what they want, we cannot and should not walk away from the idea of debate.  What we need is a rulebook for when it’s worthwhile.  The question is whether the persuadable audience (however large or small that might be on your side or on the other person’s side or in the middle) will be lured to an opponent’s side more by his or her performance pretending your objections are not valid or by his or her arguments’ remaining without response.

The determining factor is probably the mix of the audience. Don’t debate trolls on your turf, because you only stand to lose. Be eager to debate on their turf, because you only stand to gain (provided your skin is thick enough to weather the inevitable onslaught).  And do a cost-benefit analysis when the debate will occur on a relatively neutral platform.