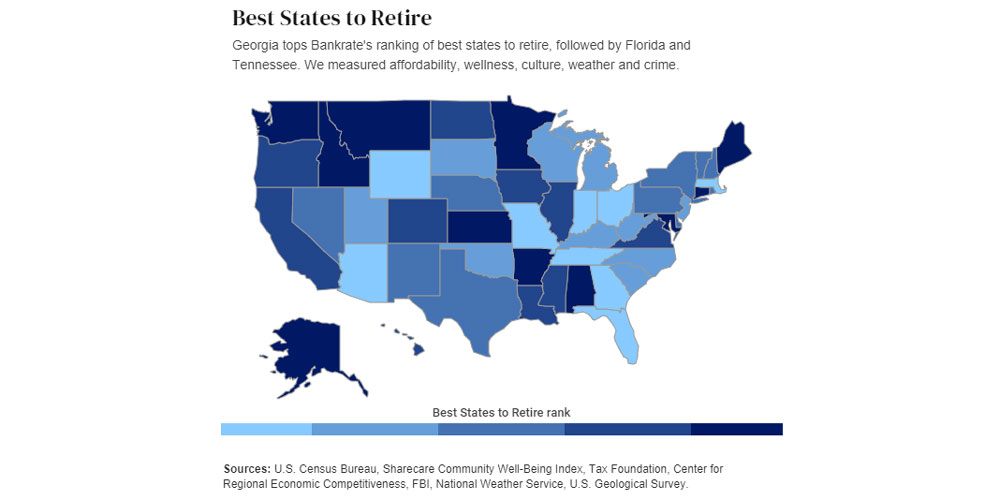 Bankrate has published its “The best and worst states for retirement 2021” and as indicated in the featured image of this post (if you look closely), Rhode Island does pretty… not terribly, coming in at twentieth among the fifty states.

As is often the case with these more-broadly-construed rankings, the key conclusions are to be found a layer or two down from the headline.  Here are the underlying ranks that contributed to the Ocean State’s overall score (with the percentage weighting for each factor):

Those who take an interest in Rhode Island’s condition should consider three possible lessons from this outcome.

First, not unexpectedly, Rhode Island does poorly when it comes to affordability.  Our better-than-average showing comes from the attractiveness of living here for other reasons, the experience of it.  Government officials and others who advocate for change have to careful of adding costs on the affordability side, but also on keeping crime down, allowing areas to keep their unique character, allowing compelling businesses and institutions to pop up, and so on.  In some ways, WaterFire could be considered emblematic.

Second, if Rhode Island is attractive for retirees, in part because the weather is actually not terrible, that should raise some doubts about typical excuses made for our residents’ leaving, particularly for Florida.  Yes, weather is probably a factor for some (and while 22 isn’t bad, that is our second-worst rank on the above list), but it’s almost certainly not the primary story.

Third, just imagine if Rhode Island could get its taxes and cost of living under control.  If we could get affordability down to the level of places like Delaware, Pennsylvania, and New Hampshire, we would rocket up to sixth place, right behind Massachusetts.

Of course, being attractive for retirees isn’t self-evidently a state’s best target, and using a single organization’s ranking for metrics isn’t the way we should go about it, if it were.  The lessons are valuable, though, and give a tangible example for how policy decisions can be considered.