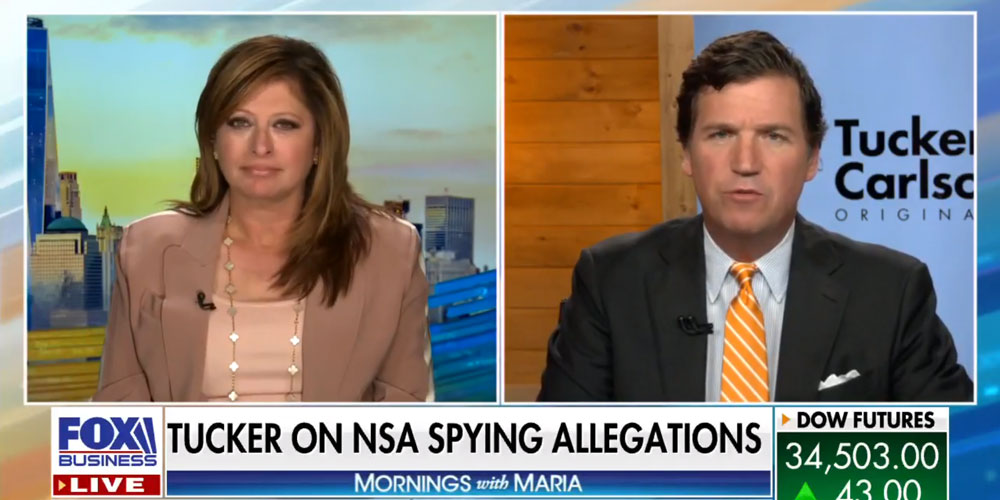 Note the dog that isn’t barking about Fed spying on Tucker Carlson.

Popular Fox News host Tucker Carlson has noted a development in his ongoing conflict with the National Security Agency (NSA) after a whistleblower informed him the agency was reading his emails and planned to leak them to the media to discredit him. Jon Brown reports on The Daily Wire:

Speaking with Fox News host Maria Bartiromo on “Mornings with Maria,” Carlson said, “Yesterday I learned, that — and this is going to come out soon — that NSA, leaked the contents of my e-mail to journalists in an effort to discredit me. I know because I got a call from one saying, ‘Oh, this is what your e-mail was about.’”

Here’s the curious thing:  Only one reporter said anything.  Today, the mainstream media is abuzz with an Axios “scoop” that Carlson was asking around to secure an interview with Vladimir Putin, which is likely part of the NSA story, but that’s days after the initial revelations from Carlson.

In that intervening time, no journalists contributed to the public’s understanding by acknowledging that they had received correspondence from the NSA.  It simply isn’t credible that only one reporter received the messages — and one who was inclined to contact Carlson, at that.

Indeed, it appears that what we’re seeing is as follows:  Carlson disrupted cooperative plans between the Biden Administration and journalists to catch him up in a scandal.  The response was a carefully phrased denial by the NSA followed by a media pause to give the stench of that angle of the story time to dilute before deploying the attack.

As disturbing as domestic spying is, the problem is compounded by a complicit news media.