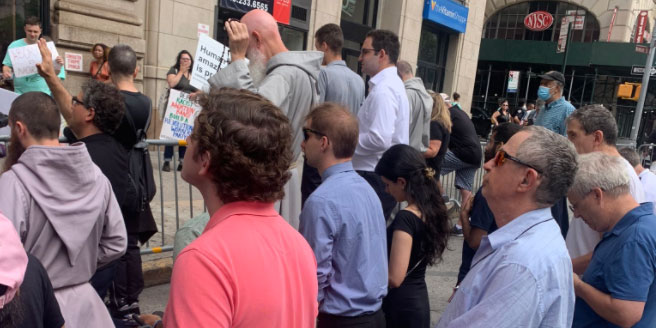 It’s not difficult to see where the urge for fascism really is on the American political spectrum.

Nobody should ever accuse progressives of spending too much time on self reflection.  Consider the following, from an article for Catholic News Agency by Joe Bukuras about pro-abortion protesters’ blocking a Catholic pro-life procession:

“Violence can look like a man throwing punches,” a copy of a [New York City for Abortion Rights (NYCFAR)] flyer says. “It can also look like a large crowd of churchgoers praying outside an abortion clinic, trying to manipulate and pressure people into continuing their pregnancies at all costs.”

If praying “can look like” violence, what about physically preventing the movement of churchgoers along a public street?  And we’re not talking quietly standing in one place:

“What struck me was the anger,” [National Review’s Kathryn Jean] Lopez said. “What also struck me was the venom, not just from counter protestors but also the people on the street. The thing I can repeat is ‘you’re the worst,’ but you can imagine the expletives and other words that are thrown at people.”

[Deborah Sucich, a consecrated virgin for the Diocese of Brooklyn and organizer of the Witness for Life,] told CNA that following Saturday’s Witness for Life march, St. Paul’s Church was harassed by 100 threatening phone calls through Monday afternoon. An NYCFAR flyer had encouraged people to call the parish.

Prayerful Catholics are pretty much the ideal foil for the Left, because activists can talk themselves up as bravely standing against oppressors without having to fear actual violence in response.  A couple weeks ago, we saw the next notch on the ratchet in Los Angeles when Antifa harassed and beat people protesting a spa’s policy allowing men who identify as women to expose themselves to women and girls.