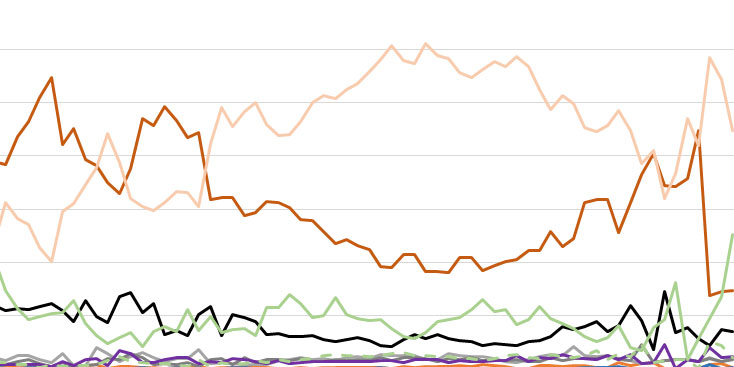 A review of the data, yesterday on Anchor Rising, found no evidence that COVID is exploding among children or that those who catch it are tending to be more sick.  But given the fear-mongering in the news media and public health establishment, it’s worth asking:  Why is this the only trend that folks are digging into?  The answer to such questions seems often to be because the people who make up the mainstream media are afraid of what they might find.

Let me say, upfront, that I’m speculating in what follows.  With increasing frequency, information has been floating across my screen in the category of “things that make you go, ‘hmmm’.”  I’m just thinking out loud, so to speak.

One example is this AP headline from a couple weeks ago:  “Rhode Island sees mysterious surge in Legionnaires’ disease infections.”  Per the state Department of Health, Legionella bacteria grow in poorly-maintained water systems, and the state had seen 30 cases since the beginning of June when the average is usually 10 per month.  Last week, the “hmm” headline came from WPRI: “Hospitals seeing unusual increase in RSV cases among children.”  This bug, we read, is typically seen only in winter, but there’s been a surge in Florida and some in Rhode Island, this summer.

Another track of headlines that have caught my eye relate to a distinct topic.  Hundreds of children are picked up illegally crossing the border every day.  Thousands of illegal immigrants who tested positive for COVID-19 have been released.  The surge is overwhelming facilities at the border, and migrants are being sent around the country after having spent some time in incredibly unsanitary conditions.

These various items require major investigation (if only we had an industry that was supposed to pick up these threads and follow them for the benefit of the public), but for my purposes, let’s look at a very small cut of data.  Specifically, is there anything relevant to be found in the COVID-19 data for Rhode Island that I spent so much time with, yesterday?

Well, here’s a “hmm” observation.  It’s a simple reality that migration at the southern border of the United States involves people from Central and South America, who tend to be designated as “Hispanic or Latino.”  Conspicuously beginning the week of the presidential inauguration, people in that category began climbing as a percentage of all positive COVID tests in the Ocean State.  Despite representing 16% of the state’s population this category went from representing 18% of weekly COVID cases during inauguration week to representing 45% the first full week of July, which was the largest percentage for any demographic.

Don’t forget, by the way, that these are percentages of all new cases.  The actual numbers were going down throughout this time and remain small, and are therefore susceptible to minor changes, whether the immigration explanation or simply an outbreak in a particular social group.  These lines show results for groups relative to other groups, so what is seen as an increase in one could actually be a greater decrease in another. 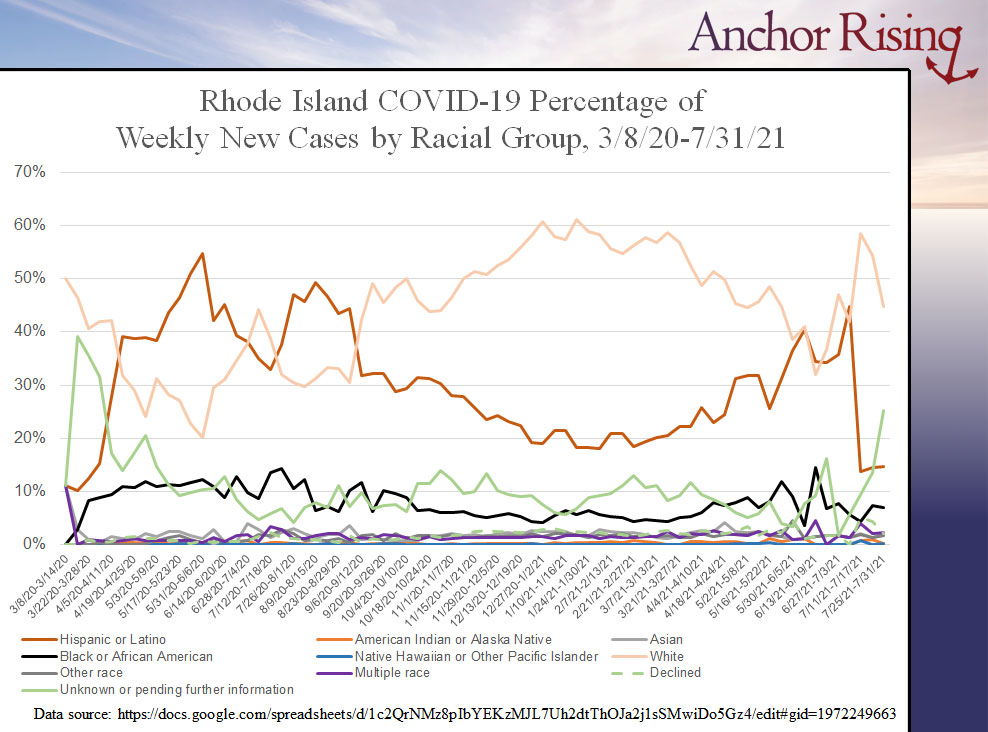 After hitting a peak, the “Hispanic or Latino” group plummeted to 14%, but notice that the “unknown or pending further information” and “declined” categories shot up at the same time.  It’s as if somebody in government recognized the political risks of the data and changed the policy for how people are counted.  Less conspiratorially, we should remember (again) that these are percentages of new cases.  The numbers for “white” people climbed steeply, which could also indicate a change in how people were designated or simply that infections had moved into new communities.

We should keep it very clear in our minds that there may be other explanations than immigration speculation for these trends (or a mix of explanations).  For instance, over this time, Hispanics/Latinos went from representing just 3% of all vaccinations during inauguration week to 31% when they took the lead for cases.  So, remembering that the apparent increase is really a slower decrease, it could be they, in general, were more reluctant to be vaccinated, so it took longer for vaccination to get ahead of the disease.

We should also absolutely not scapegoat groups of people or assume we know the explanation for complex trends.  The important point is that these are topics about which the public should be informed, and that’s impossible if nobody is willing to ask uncomfortable questions.  Are there trends in the COVID data?  Are there common threads in the Legionnaires and RSV cases?  Is Rhode Island receiving illegal immigrants being dispersed by the Biden administration?

These are important questions that we can’t trust the establishment to ask (let alone answer).