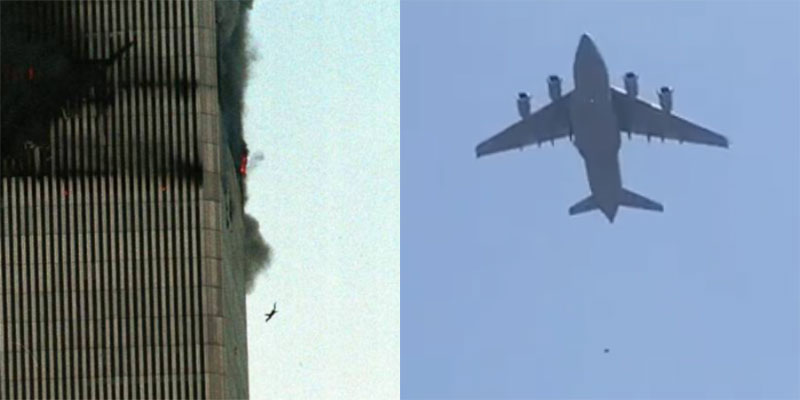 The War on Terror has become a dreadful circle of people falling to their deaths.

This is dreadful.  Haunting.  Soul shaking.  Short video clips tell the story of people attempting to cling to the outside of airplanes to escape Afghanistan after the Biden administration’s inexcusable botching of troop withdrawals.

The image immediately brings to mind the people who jumped or fell from the Twin Towers on 9/11/01.

That day, and those videos, prompted the United States to embark on a War on Terror.  That is, it began with images of people falling to their deaths after a terrorist attack planned in Afghanistan against the symbols of modern life and prosperity.  Today, we’re seeing images of people falling to their deaths as they cling to modern technology in an attempt to escape Afghanistan’s return to the Fifth Century… only with modern weaponry.

I hardly know where to begin. I am old enough to remember the fall of Saigon, history repeats itself. Foreigners cross our southern border in 10’s of thousands, but I understands previously helpful Afghans are left to their own resources. I expect they are as good as dead. As to our commander in chief; I have military experience, while perhaps not an expert tactician, some things are obvious. A perimeter should have been established around Kabul. Although “in the entire history of warfare, no one has ever surrendered to an airplane”, air power should have been maintained to prevent massing by the Taliban. For this, our boys died? Another thought. Afghanistan still produces about 80% of the world’s heroin. The Taliban will put a stop to this, they don’t “just say no”.

I have to make another comment to distinguish this from Saigon. In the Vietnamese war we had the draft, practically everyone of an age knew someone killed. With the volunteer army, most people regard Afghanistan as “the military’s problem”. Few “elites” know any of the “white redneck bible clingers” that make up 95% of the military’s sharp end. They don’t know the dead.