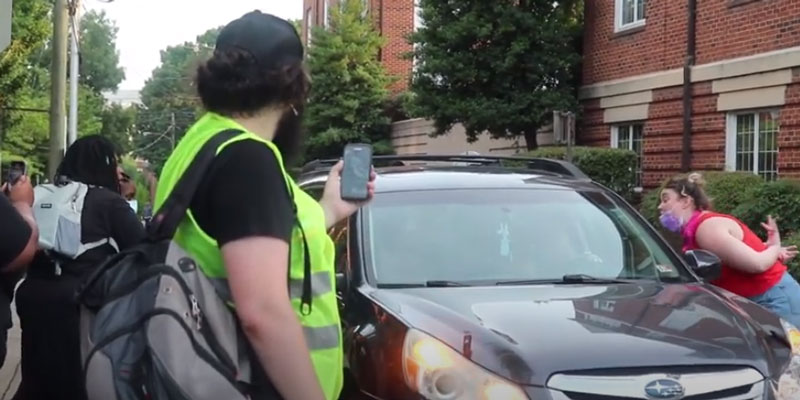 This UVA saga shows that woke incentives and systems are terrifying.

The story of Morgan Bettinger at the University of Virginia, as Mairead McArdle describes it for the Daily Wire, is terrifying.

Driving home on a Friday last summer, before her senior year, McArdle came upon a BLM-related roadblock.  She got out of her car and chatted with “a city dump truck driver who was blocking the road.”  Then:

Two protesters overheard pieces of that conversation and immediately spread the word that Bettinger had said that “the protesters would make good speed bumps.”

One of the organizers of the demonstration, Zyahna Bryant, a rising sophomore at UVA, posted Bettinger’s name on social media, calling her a racist and urging her fellow students to demand her expulsion. There is no known video of Bettinger making the remark, although Bryant claimed that at least 30 people witnessed it.

Bryant also posted video of the aftermath of the incident, which showed protesters surrounding Bettinger’s car and shouting at her, calling her a “Karen” and mocking her for “crying.” The protesters follow her car as she backs away from them. Her windows are rolled up and she appears to be on her cell phone.

Other Twitter users attempted to dox Bettinger, posting more of her personal information including her license plate number, email address, and Facebook profile, as well as the fact that her father was a police officer.

Here’s video of the protesters shouting at her and mocking her in her car, with the ridiculous title, “UVA Student Threatens BLM Protesters.”

Despite the fact that she was a victim of mob harassment, Bettinger then “convicted” by “the student-run University Judiciary Committee (UJC)” after the activists filed complaints against her.  The more official Office for Equal Opportunity and Civil Rights (EOCR) took longer to come to its conclusion, so as she approached her graduation date, UVA threatened to withhold her degree unless she performed 50 hours of social justice community service and “complete[d] three hours of remedial education,” along with writing a letter of apology to the ringleader of her harassers, Zyahna Bryant.  On top of that, she was “suspended,” which is apparently more like parole in this context.

This is madness.  Think of the incentives this creates for left-wing mobs.  Indeed, considering how unexciting these coddled protests can be on college campuses, one suspects the participants were looking for some what to generate drama and saw an opportunity with Bettinger.

Thus the real assailants are rewarded, and their target is punished — at the very least with a year of continued harassment while jumping through the hoops of an institutional bureaucracy.  This same dynamic exists all throughout our society, and we’re sure to see more such stories, and worse.

“the student-run University Judiciary Committee (UJC)” why am I thinking “lynch mob”.