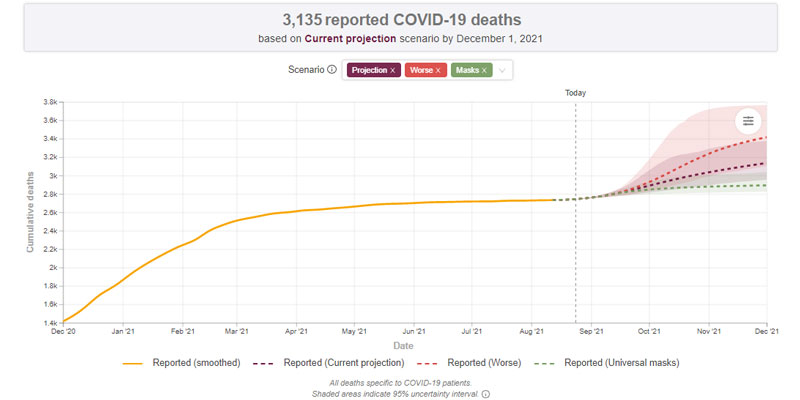 The COVID overreaction playbook puts the ripped-out death-models page back in.

Remember everybody’s fascination with the COVID-19 projections from the Institute for Health Metrics and Evaluation (IHME) when this whole thing started?  On April 8, 2020, I noted how the institute’s projections had a strange habit of not matching reality.  That day, the scary proclamation was that Rhode Island had 21 days to peak daily deaths, which would hit, they said, 31 on April 29.  The actual number reported for that day — and remember that we’re talking people who died while testing positive, not people who died because of the virus — was 18.

Yet, Dan McGowan’s daily RhodeMap newsletter today reports the following under the headline “A grim outlook for COVID-19 in Rhode Island“:

As the Delta variant continues to wreak havoc on the country, Rhode Island is on pace see several hundred more coronavirus-related deaths by Dec. 1, according to a projection from the Institute for Health Metrics and Evaluation (IHME) at the University of Washington. …

McGowan pivots directly into Governor Dan McKee’s school mask mandate.  He does not give any context for the IHME’s track record.  He also doesn’t describe the uncertainty, which I’ve included in the IHME chart used for the featured image of this post.  In actuality, the worst-case scenario could be as low as 3,101 deaths by December 1, while the universal mask scenario could be as high as 3,037.  It wouldn’t take much by way of unintended consequences from universal masking to be worse than that benefit.  And by the way, the IHME assumes that every reported death is an “excess death,” meaning the person wasn’t going to die anyway, which is (let’s say) implausible.

One thing nobody seems to be asking is what happens with only partial masking.  The IHME’s model of the benefit of universal masking assumes that the 80% of Rhode Islanders who are not currently masking suddenly all put them on and (presumably) use them perfectly.  That’s just not going to happen, and it may very well be that partial masking would have almost no effect at all.  A four-person household with one teenager who doesn’t mask has a household masking rate of 75%, but that one person could bring the virus home.  If the younger child has a habit of slipping his or her fingers under the mask for a nose scratch, that reduces the effectiveness, too.

This raises another projection for which nobody seems to ever ask:  What would be the results of a targeted approach that, say, left children alone but strengthened protection of vulnerable people?  Models that give us all-or-nothing scenarios with a middle-ground “projection” are fun to play with, but they don’t give us much information by which to make decisions.