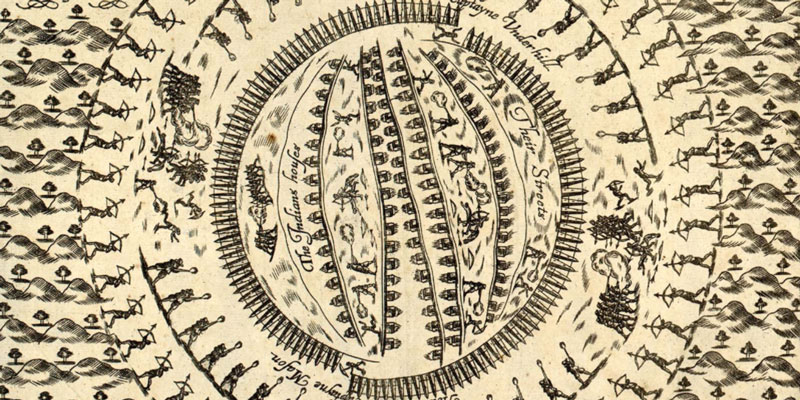 If a cow-riding hermit like Rev. Blackstone is akin to Hitler…

…then what do you call, for instance, the 200 or so Narragansett’s who helped wipe-out the Pequots at Mistick Fort?

On May 23, a force of approximately 80 English (10 remained with the ships), 60 Mohegan and River Indians under Uncas, and 200 Narragansett marched 30 miles to present-day Mystic, Connecticut….Mistick Fort was engulfed in fire fanned by a stiff northeast wind. The English retreated and encircled the fort to prevent anyone from escaping, while firing into the fort at anyone who attempted to escape.  The Mohegan and Narragansett formed an outer ring preventing further escape of Pequot who slipped through the English line.

In one hour, more than 400 Pequot men, women and children were killed. The English reported only seven Pequot were captured and seven escaped.

Of course, the truth is rather messy and complicated.  The English Settlers “benefited” from the plague that wiped out 90% (estimated) of the Native population in 1618-19.  There appeared to be a lot of empty land.  The Narragansett tribe also benefited and moved to fill the power vacuum at the same time the English colonists were arriving. Their enemy? The Wampanoag, who had been decimated and were eager to make an alliance with the English newcomers to help defend against the Narragansetts.  If the English had never arrived, perhaps the Narragansetts would have been able to completely subjugate the remnants of the other tribes. But that’s not how history worked out.

[…] why I love when Marc makes use of his advanced history education.  We wouldn’t be having the social troubles we’re […]