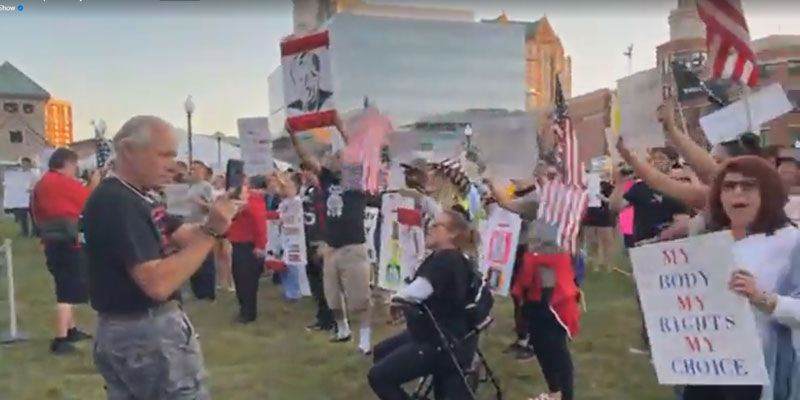 Healthcare workers are not backing down, despite media ambivalence.

Healthcare workers (many of whom have no doubt had COVID and are therefore immune) continue to protest Democrat Governor Dan McKee’s mandate that they get vaccinated or lose their jobs.  John DePetro has video.

The contrast with mainstream media coverage is striking. DePetro’s headline is “Front line protesters takeover WaterFire.”  The only coverage I see from mainstream media sources is tagged on at the end of WPRI and Providence Journal coverage of WaterFire itself.

Perhaps reporters Carl Sisson and Paul Edward Parker, respectively, realized how bad it would look not to mention them at all.  After all, their headlines are “WaterFire honors RI’s COVID-19 heroes in first lighting since pandemic hit” and “WaterFire Providence kicks off 2021 season with salute to ‘COVID heroes’.”  It would be conspicuous not to mention that some of those heroes were participating in a protest at the event.  Parker’s relevant paragraph oozes bias:

About a half-hour before WaterFire began, some 100 demonstrators protesting McKee’s mandate that all health-care workers get vaccinated marched around the basin. They lingered after the fires were lit but couldn’t be clearly heard as they chanted while WaterFire’s music played.

Parker has a short video, but one would think the significance of the protest would lead a reporter to ask both protesters and folks in the audience what they think of the situation.

Note the crowd estimate, too:  “some 100 demonstrators.”  What does that mean?  Sisson puts it at “hundreds,” in contrast with the “thousands [who] were out to celebrate.”

One can’t help but compare this coverage with the full article Sisson published of a progressive anti-gun rally.  Despite its being billed as a “500 Women Walk Against Gun Violence,” the included video gives the impression of dozens, although Sisson doesn’t offer a number estimate.

But that’s a cause that insiders want to perpetuate, whereas they no doubt wish the protesting healthcare workers would go away.