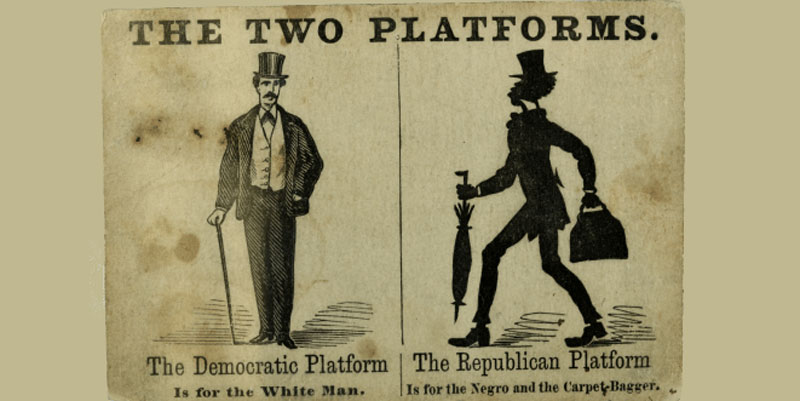 Owing to the fact that a local union official and I have the same name, I’ve been peripherally following a controversy in Boca Raton, Florida, involving an unnamed teacher who was suspended for showing his high school history class Civil War–era political imagery, including the one used as the featured image for this post.  These lessons are so clearly on the educational side of the divide, it’s shocking that they’re even an issue.  Boca News Now has sample images and text from the class, as well as the transcript of a ridiculously simple-minded robocall the district sent to parents:

Your child’s teacher included a political illustration from the 1800s as part of instruction. That illustration contained a derogatory slur. Although the teacher was sharing an example of past political commentary, any type of racial slur, no matter the context, is not acceptable in the District’s educational setting.

We have to be careful what sort of children we’re raising.  If by high school teenagers aren’t emotionally capable of putting historically common words in their context, their schools and parents are failing them egregiously.  Indeed, an 1861 Chicago Tribune news clipping that the teacher juxtaposed with one from a Southern paper seems poignantly relevant to our times, although the geographies have arguably switched:

The North is prosperous and the South is not. The one increases and multiplies by a process which freedom and civilization constantly accelerates. The South goes far backward by a process which ignorance and slavery inaugurate. The wealth, the power, the intelligence, the religion and advanced civilization are with the first. The last is secondary and retrograde. It is the infirmity of semi-barbarous men to hate what they cannot imitate; hence the bitterness which marks the utterances and emphasizes the actions of the rebels. Dislike of what is above and beyond them is at the bottom of this.

If the geographic divide has (at least) muddied, I’d argue that the parties have not.  Look closely at the featured image of the post.  Big tents lead to diverse populations, of course, but in general, the party that appealed to racists then is the party that appeals to racists now, although they’re much cleverer about disguising it.

One wonders how much suppressing Democrats’ evil history motivated this suspension.