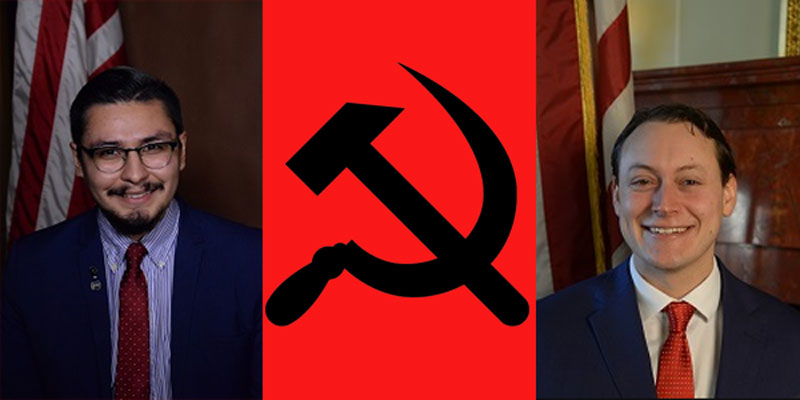 Representative David Morales and Senator Sam Bell are overt socialists.

Literally.  Here’s the headline of an interview they did with Jacobin, an explicitly socialist magazine: “Socialist Legislators Are Taking on Rhode Island’s Ultraconservative Democrats.”

It shows you how frighteningly radical these people are that they say, apparently with a straight face, that Rhode Island’s leading Democrats are “ultraconservative.”  Naturally, this is standard language for Bell, who characterizes Rhode Island policy as “brutal right-wing economic policies passed by Democrats.”  Surprisingly, he doesn’t use the word “horrific” in the interview.  (That’s a favorite of his.)

Maybe they’re all laughing into their sleeves.  Consider this exchange with interviewer Daniel Crowell:

DC: Sam, I don’t remember anything that extreme during your election, but I imagine you still had some dirt thrown at you.

SB:  [Refers to ballot harvesting controversy.] So we do have a lot of aggression and the machine will resort to a lot of dirty tactics. There was also a Twitter account set up to put out memes about me.

DC: I liked that.

SB: I didn’t particularly enjoy it at the time. But I did enjoy how they made Red Scare memes about how I wanted to turn Rhode Island into Venezuela — putting my photo next to Mao and Lenin and Marx.

DC: Since you were exposed to those red-baiting tactics, what do you see as the benefit of associating with Providence DSA and identifying as a socialist?

Notice the effortless wafting across the line where associating them of being socialists is “red-baiting,” while proclaiming how wonderful it is to be openly socialist.  They never bother to define where they differ from Mao, Lenin, Marx, and Chavez.  If the interviewer were to ask, “Well, what sort of socialist are you?,” the answer would be some variation of, “The kind who supports all of the good things about socialism and none of the bad.”

But socialism is bad.  It’s a flawed ideology that packages fairytales as “fairness” and wreaks havoc on a society.

Maybe the kids who’ll be beginning to vote in the next few elections have been sufficiently brainwashed by union teachers and the media propaganda that they’ll be fine with open socialism.  If so, we’ll see the little sliver of their remaining mask come off.  After all, the actual Jacobins instituted the Reign of Terror in France.

In the meantime, now that they’ve self-identified so as not to be misunderstood, we should insist that Bell and Morales are accurately labeled as socialists.