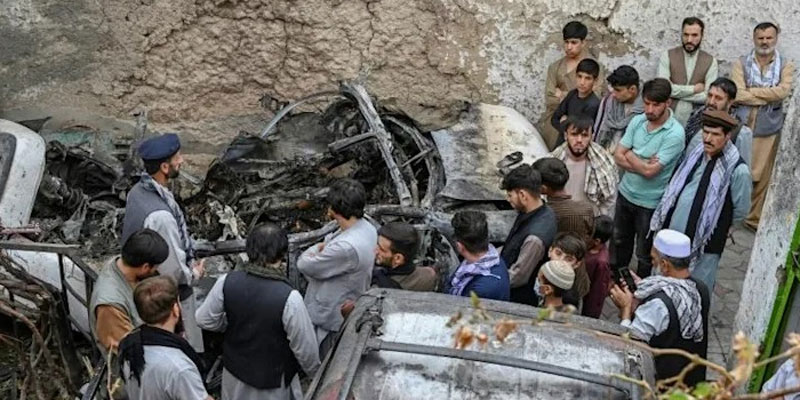 The botched drone attack was much worse than a standard collateral damage incident.

The details of the U.S. drone strike on a humanitarian worker in Afghanistan are horrific:

The U.S. acknowledged reports of civilian casualties and said they may have been caused by secondary explosions. The family said when the 37-year-old Zemerai, alone in his car, pulled up to the house, he honked his horn. His 11-year-old son ran out, and Zemerai let the boy get in and drive the car into the driveway. The other kids ran out to watch, and the missile incinerated the car, killing seven children and an adult son and nephew of Zemerai.

Is it too much to expect somebody to have eyes on the target when causing massive explosions in residential areas — somebody to get on the radio and say, “Do not fire. We have children present”?

Watching the excuse-making from Democrat Twitter last night, it seemed to me that the sequence of events has to be made part of this discussion.  The Biden administration created a dangerous situation with its botched withdrawal from Afghanistan.  When there was an inevitable terrorist attack, administration officials felt they had to save face by striking back.

The order was probably something like, “Find me somebody to attack,” and it’s not inconceivable that the Taliban provided the intel on the target.

Yet, the palace-guard media is still on duty.  Check out this disgustingly convoluted first paragraph from an AP article that WPRI gives the toned-down headline, “A deadly mistake: Pentagon says drone strike kills 10 civilians“:

American Troops are out of Afghanistan, and it was made known by Pentagon officials that the last airstrike of the war in the country was a mistake.

That’s how the mainstream press opens a story about an American drone strike on the innocent children of a humanitarian worker?  The story doesn’t even give the heart-rending details.  There’s only one circumstance in which reporters will do that:  When they’re trying to protect an incompetent president from their political party for ideological reasons.

No matter how you want to look at it, what you may want to call it, etc…it was an, unfortunate, War Zone, Collateral Damage incident brought about by well-intended information put together to protect “Our Guys” from being killed or maimed… but, sadly, the information was erroneous!

Another example of the Tragedies of War on the Innocent!

I apologize it took me so long to approve your comment; now that you’ve got one approved, your comments should be automatically posted.

Your position is certainly defensible and worth considering, but you’re making assumptions about intentions and reasons with which I disagree. Unfortunately, we’ll probably never know. That’s the “fog of war,” I guess.

“Collateral Damage”, I wonder what war that was invented for. We fight wars that way. Consider the number of innocent Swiss civilians we bombed into oblivion in WWII. How about the hundreds of thousands of civilians incinerated by firebombing Germany and Japan. We simply decided that civilians were vital to their war effort. How did we decide to have “nice” wars with RofE that tie our men’s hands. Sometimes I think we are like the Germans, relying on “wonder weapons”.

When you are grasping at straws, these are the things that happen. The “drone” (the great toy of the 21st century) has made things too easy. Many will recall the famous picture of the missile flying right into a door in Baghdad. Few realize there was a man on the ground “lighting” the door with a laser to guide the missile. He could have said, “stop there are kids”. Now, fire control is where, Arizona, isn’t it? And those controllers, a generation raised on video games. Perhaps if we took them to see the bodies. War is about death and destruction, let’s not kid ourselves. Trust me.

I remembered the movie but not the title. I also remember serious news articles at the time describing how video games would make that generation better soldiers. If you would know about war, I commend “Goodbye Darkness”, William Manchester’s account of service in an “Ivy League” rifle company in the South Pacific. He describes killing a Japanese soldier in hand to hand combat. Manchester carried a piece of Japanese shrapnel around in him until his death in the midst of his Churchill trilogy.

Killed from 1000 miles away:
The Scientist and the A.I.-Assisted, Remote-Control Killer Robot – DNyuz

The innocent must beware of Biden’s threat never to forgive or forget. – Anchor Rising

[…] course, as we soon learned, the people whom Biden made to pay three days after his big talk were an aid worker and seven […]