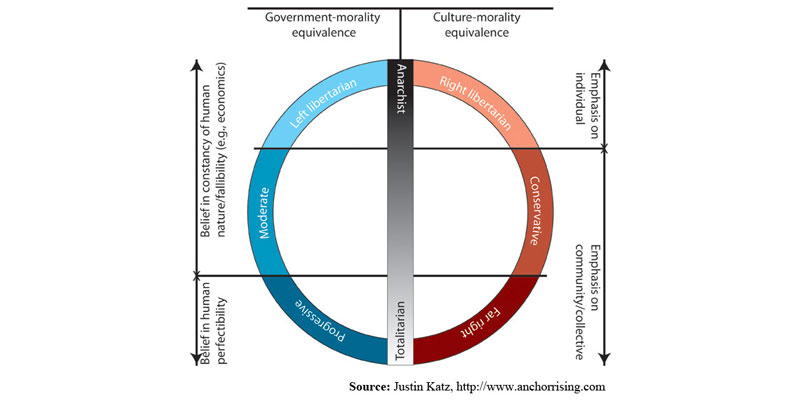 The headline from a Dennis Prager commentary in the Epoch Times evokes two distinct ideas.  Here’s the headline: “As America Has Become More Secular, It Has Become Less Free.”

The first idea is along the lines that Prager emphasizes:

Being Jewish, Prager doesn’t move on to the New Testament, but there, too, freedom permeates.  Even in the abstract, one can see why this must be so.  The Judeo-Christian concept of God puts front and center the individual’s relationship with a divine presence.  The ruler isn’t a god.  Our gods aren’t embedded in the objects and lifeforms of our households and environment.  Whatever intermediaries we may acknowledge, the fundamental connection for each individual is straight up to the top, so to speak.  We always have that reference for anybody in between who claims authority over us.

This blends nicely into the second idea, which is that this goes back to the circular political spectrum that I proposed in this space years ago (shown as the featured image for this post).  As our country has divided and anarcho-fascist groups like Antifa have emerged, the categories I suggested have held up well.

The central axis is most relevant to Prager’s essay.  On the Left, government is the source and enforcer of morality.  On the Right, it’s culture institutions, which includes religious ones.  Cultural institutions are distinct from government institutions mainly in that they impose their rules more softly, often through the mild expression of preference.

Religious belief in a direct relationship with God may not be necessary for those on the right (certainly not overt and conscious religious belief), but it is difficult to understand how sincere believers can knowingly wind up on the left.  Perhaps a more fair depiction of the spectrum would be as a three-dimensional sphere, such that the morality axis could be a measure of degree, rather than a binary choice, allowing a moderate to move toward conservatism (for example) without passing through anarchy/totalitarianism.

But when all is said and done, one has to control or the other:  government or culture.  If one believes government should align with and enforce morality, then that human institution is replacing God.  On the flip side, if one believes a church should enforce morality through some sort of tax or police scheme, then that religious institution is becoming a government.  In either case, the person is implicitly amplifying a belief in human perfectibility and therefore is moving into progressive or far-right territory on the way to totalitarianism.

When the combination of the two spheres becomes a problem, it is because the impulse to govern has corrupted the religion, not because religiosity taints the purity of government.