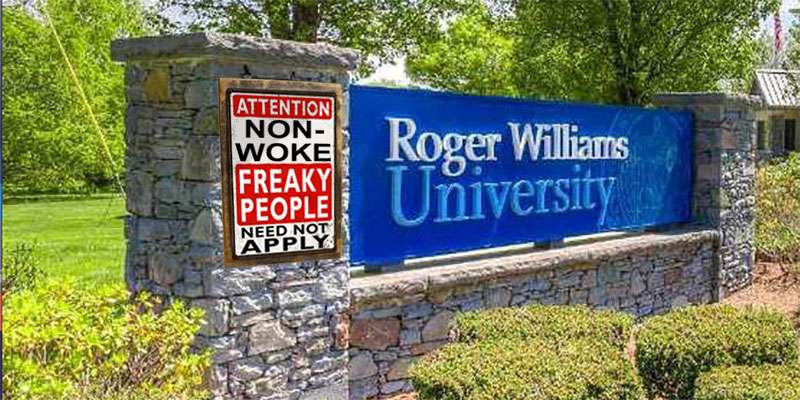 Interested in a job with Roger Williams University as a prep cook, payroll specialist, baker, shuttle driver, retailer, plumber, or even sometimes-nude model for art students?  You might want to find yourself a woke consultant, because applications for all of these positions must include a cover letter with “information about how you would be able to contribute to RWU’s diversity, inclusivity, and equity goals.”

Apparently, the university considers this qualification particularly important for “figure models,” because the job posting emphasizes that the “University seeks candidates who, through their work and life experiences, service to the community, and teaching or research, can contribute to our diversity, inclusivity, and equity goals.”  Presumably, “I am willing to take off my clothes in front of anybody” would be insufficient.

Naturally, where a job involves the creation of any sort of content, the need to adopt this posture — to take the woke-allegiance pledge, as it were — is particularly important.  The university lists as a requirement that a content producer and editor in marketing and communications must prove a “well developed sense of intercultural fluency and a track record of creating content that advances equity.”

Non-radicals need not apply… for any job whatsoever.

Given the current state of the law, it isn’t clear that this mandate is legal.  (Although, it also isn’t clear that any lawyer employed by the university would be permitted to object to the policy rather than look for ways around the U.S. Constitution.)  Replace “contribute to RWU’s diversity, inclusivity, and equity goals” with “support the university’s Catholic mission,” and the problem becomes clear.

A recent ruling by a federal judge found that a Catholic school could not cancel the services of a regular substitute after he modeled a lifestyle contrary to Catholic teachings by entering a same-sex marriage.  According to the judge, “Plaintiff is a lay employee, who comes onto the campus of a religious school for the limited purpose of teaching secular classes, with no mandate to inculcate students with Catholic teachings.”

To the contrary, believing Christians understand that every aspect of our lives is meant to evangelize our faith, which becomes acutely true in a setting with the explicit mission of teaching children.  A significant reason families choose Catholic schools is that they take the religion seriously and incorporate it into their comprehensive curricula.  Believers of most religions probably hold this view, at some level.  Indeed, the believers of RWU are obviously dogmatic about it.

If a Catholic school is not permitted to require employees to model Catholic values “through their work and life experiences, service to the community, and teaching or research” (to borrow language from RWU’s figure model posting), while a woke school is permitted to impose such a requirement, then adherents to the radical ideology have established a prima facie state religion.

A Hanover math and business teacher was fired for not adhering to the state religion. – Anchor Rising

[…] week, a post in this space juxtaposed Roger Williams University’s requirement that new hires model woke values in their […]

[…] area in which the practices of higher education are permeating out into our communities.  As I reported in October, Roger Williams is explicitly making demonstration of woke beliefs a requirement for any […]