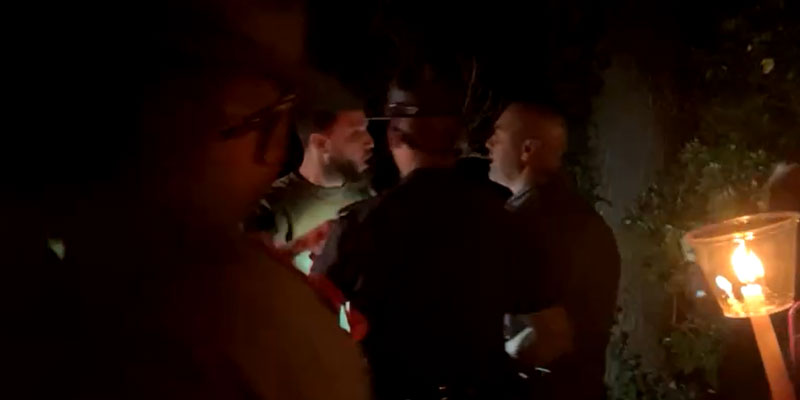 From the very beginning of John DePetro’s coverage of last night’s protest at Democrat Governor Dan McKee’s house, it was clear the treatment of healthcare professionals who are protesting the governor’s vaccination mandate was going to be very different from what we’ve witnessed for Black Lives Matter and other progressive groups.

Remember when Black Lives Matter blocked a busy intersection on Federal Hill in the early evening?  (See John’s video around minute 40, here.)  No police broke that up; it was only when they went for repeat performances that the police put their foot down.  Remember when they went to Governor Gina Raimondo’s house?  (See John’s video interviewing neighborhood kids, here.)  The protesters drove loud circles around the block then got out of their cars and set off firecrackers for around 30 minutes before any police showed up.  Remember during the initial BLM protests, when police in uniform were making supportive speeches and even marching with them?

That wasn’t the experience of the healthcare workers last night.

When they showed up, they were told they couldn’t park on any nearby public streets.  They had to park far away and walk 30 minutes or so — including small children and people in wheel chairs.  When they neared the governor’s house, police initially told them they couldn’t go down the street but ultimately allowed them.

When they reached the governor’s house, the State Police had their zip-tie handcuffs on clear display, and they got to use them during a vigil for a man who had died after being vaccinated.

From John’s video, it isn’t entirely clear what happened to lead to the arrest of two men on charges of disorderly conduct, obstruction, and resisting arrest, but it looks something like this:

Reviewing the video, I didn’t see the non-uniformed man with the officers at any point before the conflict.  He may have been laying low within the crowd (sort of undercover), which may have produced some misunderstanding and a tense moment.  It looks like Bonin caught some of that and sought to intervene, at which point the police continually escalated with no apparent reason.

As John says repeatedly throughout the remainder of the video, this is not at all how he witnessed progressive activists being treated all of last year.  As well as one can tell from the video, it looks like the police instigated the confrontation.

[…] outside the governor’s house.  As John’s video makes clear, and as I described earlier today, the police were there and waiting from the beginning and had a big hand in making […]