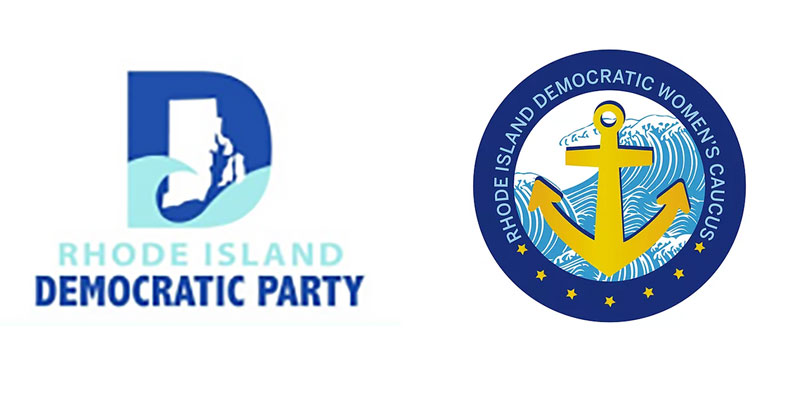 The RI Democratic Party relies on a probably-unconstitutional law to silence Democratic women.

It shall be unlawful for any club or society or association, whether incorporated or not, to include in its name the word “republican” or “democrat” or any designation indicating its affiliation with a political party, unless [it has written consent from the official party organization operating in the same political level.]

This law was first passed in 1931 and was periodically amended up until 1978.

Put bluntly, the law appears unconstitutional on its face.  Perhaps that is why my research can only turn up one 1976 court case, in the United States District Court of Rhode Island, citing the statute.  On those occasions when intra-party squabbles arose, they may have resolved themselves out of court so as not to prove the statute unenforceable.  Indeed, the judge dismissed that one case on the grounds that no enforcement action had been taken; the Board of Elections had merely requested the participants’ presence at a hearing.  Presumably, if tempers hadn’t cooled, there would be additional cases.

But unenforceable, 17-23-7 almost certainly is.  A similar question made it up to the United States Court of Appeals for the Fifth Circuit in 1975, under the title Riddell v. National Democratic Party.  In that case, the court concluded:

… In our view the opportunity to label one’s group as part of the Democratic Party has meaning, both to active party members and to the voters– not because voters are unable to discern which group of the Democratic Party constitutes the Regular faction or the Loyalists faction, but because in our view the parties to this action assume that there is a difference between Democrats and members of other political parties. Presumably this difference goes beyond mere labels and symbols to matters of substance.

To the extent then that there is meaning to the term ‘Democratic Party,’ and to the extent that the ability to use the term affects party organization, party contributions, and party loyalty, we believe that the state’s attempt to deprive the Loyalists of the opportunity to describe themselves on the ballot as part of the Democratic Party is an unconstitutional and impermissible restraint on the Loyalists’ constitutional grarantees of free association. No state interest has been argued which in any way justifies this type of intrusion into free party organization, and accordingly we conclude that the part of the Mississippi Code which regulates the use of party labels by granting the party first to register a particular name the exclusive rights to every part of the name registered is unconstitutional.

In a footnote, the judge responds to a reaction readers of the Rhode Island statute might have, given the very sweeping nature of its ban (forbidding all use of “republican” and “democrat”:

The state has a valid interest in preventing two different parties from appearing on the ballot under the identical name, thereby making it impossible for voters to distinguish between opposing parties. In accomplishing this goal, the state may grant a registrant the exclusive right to the precise name registered; it may not, however, prevent the use of that title, when used in some sufficiently different form, by another party. Thus, in this case, the initial registrant of the name ‘The Democratic Party of the state of Mississippi’ may continue to so refer to itself, but the state may not prohibit the use of the word ‘Democratic’ when another party seeks to use that as part of its party name

Think of other countries where voters are presumed to be sufficiently informed to distinguish between “Democratic” parties that use different adjectives (Christian, Socialist, etc.).  If these similarities are acceptable on a ballot, surely they must be acceptable in the names of groups that don’t purport to be parties, but merely to align with them.

It would be interesting to see if Coyne-McCoy wishes to risk further controversy dividing her party by bringing the case to the Supreme Court, but one suspects she’ll backdown pretty quickly.