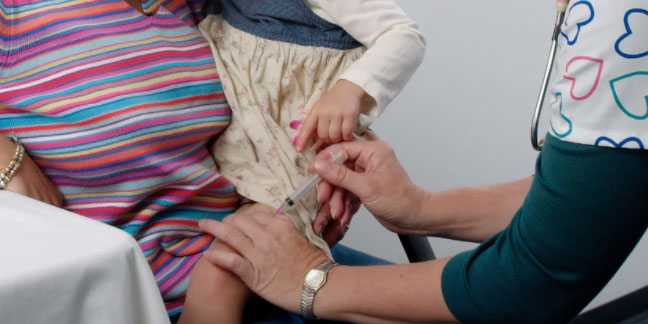 Injecting small children is where I get off the COVID vaccination train.

Pfizer is claiming a diluted version of its COVID-19 vaccine is more than 90% effective among small children, but the numbers in its study implicitly raise the question of whether it’s necessary:

A Pfizer study tracked 2,268 kids in that age group who got two shots three weeks apart of either a placebo or the low-dose vaccine. Each dose was one-third the amount given to teens and adults.

Researchers calculated the low-dose vaccine was nearly 91% effective, based on 16 COVID-19 cases in youngsters given dummy shots versus three cases among vaccinated children. There were no severe illnesses reported among any of the youngsters, but the vaccinated ones had much milder symptoms than their unvaccinated counterparts.

Only 1.4% of the kids with a placebo tested positive for COVID during the study, which compares unfavorably with 0.3% of those who were vaccinated, but so what?  None of the children had severe illnesses.

The only argument for vaccinating children is to completely take them off the table as transmitters of the disease, but then what do we make of all the talk in recent months about how the vaccine doesn’t actually prevent people from carrying and transmitting it, only lessening the severity?  If that’s the case, then the rational path is to encourage vulnerable people to be vaccinated, bringing their susceptibility down as far as possible, and going on with our lives.  We’re already there.

Take special note that this is my view, and I’m a supporter of adult vaccination.  How many millions of people are on the same ground or even more skeptical?

As elites in the government and news media ramp up to force this vaccine on children, one side effect they really ought to factor in is the social one.  The effect of trying to mandate this injection for children will be many times greater than the very limited attempts to mandate it for certain categories of professions.  Families will withdraw from schools, with many pulling up stakes and leaving for freer lands entirely, and that’s just a starter.  Whether conscious or not, that action will be in part a response to the long-term implications of this shift in the assumed authority of the collective.

And don’t doubt that the call for a mandate will go out.  It’s been increasingly clear that the driving motivation — the thing that really moves the advocates — is terror that government may lack the power to force people to do things the smart set believes they ought to do when it comes down to an irreconcilable difference.  Add in the self-protective instincts of the increasingly elderly (and aptly named) Me Generation, and a fight is very likely.

[…] despite the documented reality that children are not at great danger from this disease (see here and here, for starters).  As part of the performance, the doctor-advocates are making the rounds […]

[…] despite the documented reality that children are not at great danger from this disease (see here and here, for starters).  As part of the performance, the doctor-advocates are making the rounds […]