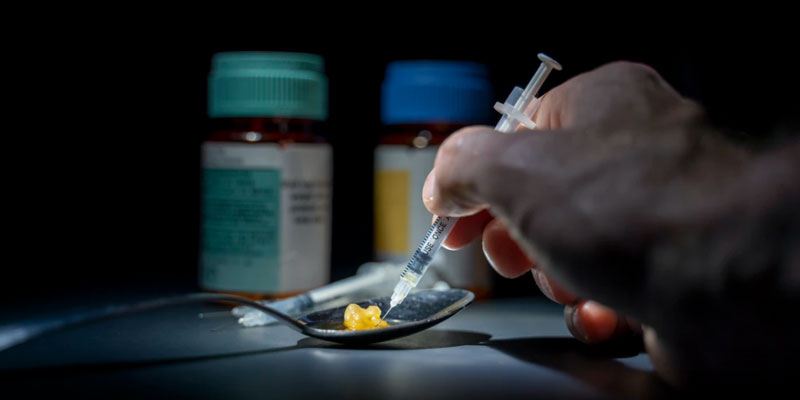 The news is national that Rhode Island has become the first state to greenlight sites where users have heavy drugs can go to take them:

Rhode Island plans to create supervised spaces for users to inject illegal drugs, in a big test of the idea that reducing harm to drug users is more effective than criminalization.

The two-year pilot, a first for a state, would establish sites where users could also have drugs tested for potentially fatal doses of fentanyl, the potent synthetic opioid that drove overdose deaths to a nationwide record in 2020. …

Such injection sites allow people to use drugs including heroin and methamphetamine, under the supervision of trained personnel. In the event of an overdose, staff can administer the antidote naloxone. Advocates say the sites prevent overdose deaths and provide an access point to other services that can help prevent harm to users, such as housing, medical care and treatment.

So what if a user, having spent money perhaps collected by begging or prostitution, shows up and learns that the government has declared this hard-won hit is too risky to allow in the safe space?  If the government confiscates it, then users will stop going to have it tested.  If the government gives it back, they’ll just go elsewhere.  If the government replaces it or refunds it, then another step is taken toward legalizing it.  Indeed, any of these possibilities — or just the fact of the injection sites — will create a bigger market, particularly in the area around the site.

A basic principle of economic and political theory is that the cheaper, easier, or safer something is, the more there will be.  This is why easy access to contraception can increase outcomes like teen pregnancies (e.g., see here and here).  While such likelihoods aren’t necessarily an argument against these policies, they suggest we might not be approaching the issue from the right angle.

Note progressive Democrat state representative Edith Ajello’s point that “the death of her best friend’s son to an overdose during the pandemic helped convince her that safe-use sites would help prevent deaths across the state.”  Her assumption is far from obvious.  If making drug use safer increases experimentation and decreases social disapproval, more people will take drugs, even if they don’t go to safe locations.  The general social feeling about drugs will have changed without necessarily carrying with it highly specific information about where to do it.   That will be especially true during a pandemic, when public sites will feel dangerous for other reasons.  Will they even be open?  Would we close movie theaters and sporting events but leave the door open for recreational use of hard drugs?

All of these questions scream that we must stop with the patchwork attempt to fix problems where they poke through and instead go back to the foundations of our thinking about drugs and the war thereon.  Progressives in politics don’t want to do that, however, partly because their other policies are culpable, partly because the solutions might be cultural and conservative, but mostly because this is just a step in the incremental scheme to make hard drugs part of the growing organized crime wing of government.

I don’t think we show people we care about their well-being by setting up “safe” spaces in which they can kill themselves. Sounds kind of crazy to me!

Also, I read this is not paid for with taxes but privately… I wonder if that means pharmaceutical companies? So they have a pipe line all set to give out suboxone and the like.