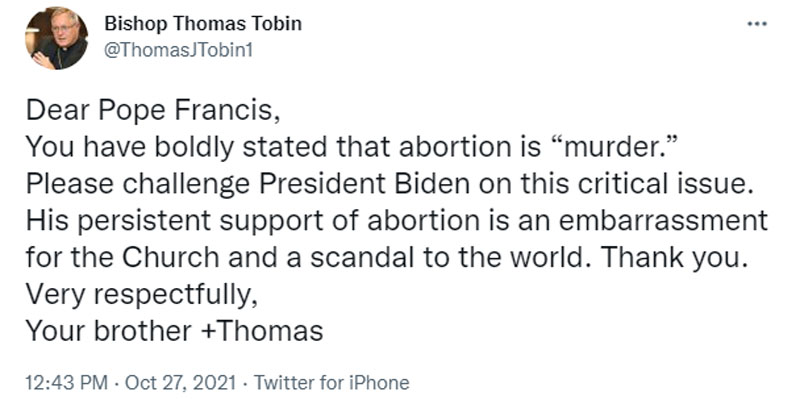 Naturally, I’m in agreement with Bishop Tobin and this tweet to Pope Francis, both in substance and in the meta-factor of thinking it needs to be sent:

Dear Pope Francis,
You have boldly stated that abortion is “murder.” Please challenge President Biden on this critical issue. His persistent support of abortion is an embarrassment for the Church and a scandal to the world. Thank you.
Very respectfully,
Your brother +Thomas

We’re talking Twitter, here, so of course such statements draw suspicion and ire, such as this response from WPRO radio host Dan Yorke:

Before Twitter…would
@ThomasJTobin1
have made a call to the Vatican, sent a letter or just prayed?
What a weird world this is these days

I’m not sure tweets like the bishop’s are all that new in what they represent.  It’s essentially a short-form open letter that might have appeared in local papers a couple decades ago, except those had less likelihood of actually being seen by the people to whom they were addressed.  Back then, such things were often understood more as public communications reflecting direct communications that were not public, and Bishop Tobin may already have utilized every channel at his disposal to send this same message internally within the Church.  (I hope he has.)

What’s new and weird these days, though, is that in the time before Twitter it was inconceivable that a supposedly Catholic president would have been as overtly pro-abortion as Joe Biden and even more so (if that’s possible) that the pope could not have been trusted to make an issue of it publicly.

As our culture sinks into the mire, a conspicuous reality is worth noting:  The people who are hostile toward Bishop Tobin and more-approving of Pope Francis tend also to be hostile to the institutional Church, generally.  Christians should recall a bit of counsel from our Lord:

Jesus goes on to say that people’s hatred of him was a response to his pointing out their sins, knowledge of which has made them culpable.  And so it is still, even after the advent of Twitter.