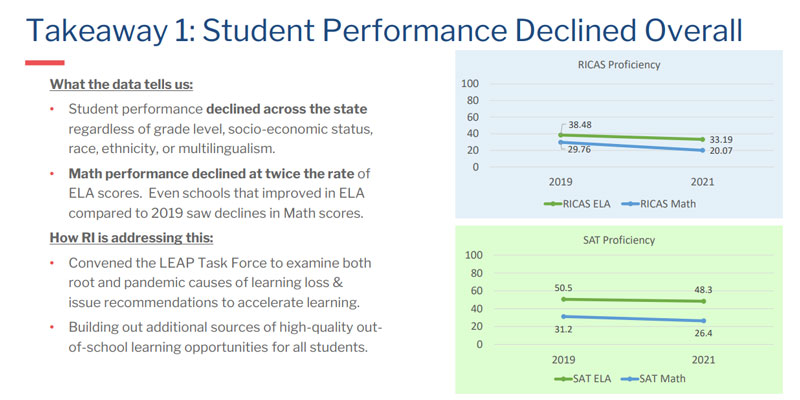 What difference do COVID-related education declines in RI make?

Not to be cynical, but the question of this post’s headline is serious.  I look at the results for students on the Rhode Island Comprehensive Assessment System (RICAS) — with overall proficiency drops from 38% to 33% in English and from 30% to 20% in math — and I think, “So what?”  The same goes for the drops in SAT proficiency from 51% to 48% in English and 31% to 26% in math.  So what?

Only 31% of RI high schoolers were ready for college math before COVID.  What’s another 5% of them lost?

(Truth be told, these numbers understate the fall.  It’s a commonplace among people who track SAT results that average scores go up when fewer students participate.  That’s because the students who are most likely not to take such tests are also not the most dedicated and motivated.)

Sure, the chart used for the featured image of this post shows decreases, but the scores were bad and barely improving anyway.  If the people who operate our education system — if all of us — were serious about improvements, we wouldn’t be having these same conversations about relatively similar shades of failure year after year and decade after decade.

If we didn’t care about fixing what’s wrong before COVID (which the lack of action in Providence since the Johns Hopkins report caught national attention in 2019 proves we didn’t), why should we care that we failed a little bit larger portion of the current crop of students in our extreme reaction to the coronavirus?  The very fact that we let the government do that to our children proves we don’t care.  Consider this additional layer of information from Dan McGowan’s Boston Globe article on the results:

But again: so what?  As the Department of Education’s presentation makes clear, compared with Massachusetts, the failure of Rhode Island’s education system was already doing two COVIDs of harm to students every single year.

Even that’s too kind, because a society that cared wouldn’t be impressed that Massachusetts only fails half its students.  COVID and the associated lockdowns and maskings have been terrible, but they are hardly a drop in the bucket of terribleness in our education system.  We’ve proven we don’t care about ongoing failure, so why should we care about this year’s slightly worse variant?

[…] noted in this space recently, most of the drop in the standardized test scores in Rhode Island was among students whose […]