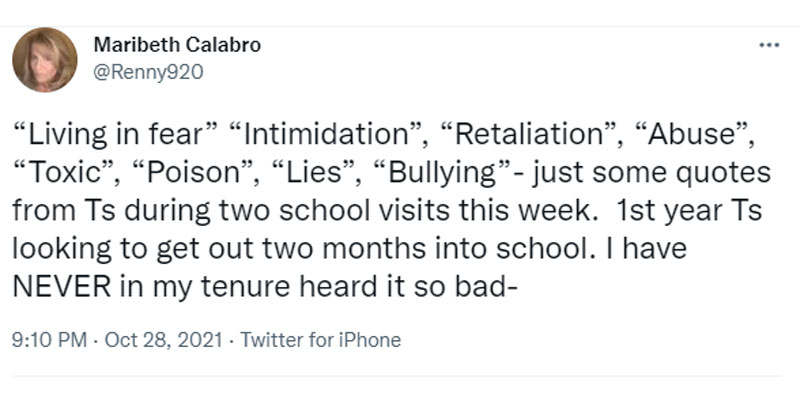 In June 2019 — two and a half years ago, when Rhode Island students now in their senior years were finishing their freshman years — the Institute for Education Policy at Johns Hopkins School of Education published a ground-shaking report on systemic failure in the Providence public school system.  The first “challenge” the authors emphasized was this:

There is an exceptionally low bar for instruction and low expectations for students. Very little visible student learning was going on in the majority of classrooms and schools we visited – most especially in the middle and high schools. Multiple stakeholders emphasized that the state, district, and business community have very low expectations for student learning. Many district team members and community partners broke down in tears when describing this reality, which classroom observations verified

Since that time (with officials quick to blame COVID-19 and the shutdowns and restrictions that they instituted), the percentage of students scoring “proficient” on the state’s standardized test (with results released last Thursday) dropped in Providence from 17.2 to 14.1 in English and from 11.9 to 6.8 in math.

Math SAT results suggesting preparedness for college dropped from 14.8% to 13.4%.  Intriguingly, however, English proficiency increased from 25.5% to 29.7%, suggesting that closing schools and imposing restrictions when they’re not closed might actually improve students’ learning in this area… at least when the results are as abysmal as they are in Providence.

Given these facts, one might expect the head of the city’s teachers union to be circumspect about trying to make the feelings of adult employees an area of focus.  Anybody expecting that, however, doesn’t know Maribeth Calabro.  Thursday night, she took to Twitter to do the opposite:

“Living in fear” “Intimidation”, “Retaliation”, “Abuse”, “Toxic”, “Poison”, “Lies”, “Bullying”- just some quotes from Ts during two school visits this week. 1st year Ts looking to get out two months into school. I have NEVER in my tenure heard it so bad-

In fairness to people who are newly entering into this corner of public debate, one could wonder whether Calabro’s complaint is meant to help explain the results that the district is seeing, but this is standard union rhetoric, and it’s always been like this.  Notice Tiverton teacher union leader Amy Mullen chiming in that things are “Not much different in my district. Just awful.”

Calabro’s statement is not a call for cooperation in the spirit of “we’ve got to fix this.”  It’s merely an exercise in blame shifting as the union seeks to protect (and profit from) the rigid approach to contracting that has produced poor results in Providence and across the state, as well as the deep involvement of the unions in Rhode Island politics, which makes any sort of reform or improvement absolutely impossible.

For more indication that perspectives are skewed, scroll down the thread.  One high school teacher expresses gratitude that her school administration maintains a lower stress level, to which Central High School Literacy Coach James Scott responds:

It is hard to achieve peak performance when stressed out. This applies to students and teachers. This is why we work to create a positive environment for all stakeholders

After some respectful back and forth with Mr. Scott, I don’t doubt that he’s doing his best, and all things considered, a positive work environment is preferable, but only 12% of SAT-taking students in his school are prepared for college English, and the math scores are so low that that the state will only report proficiency as “<5%.”  If this is “peak performance,” maybe some stress is justified.

Scott makes the reasonable observation that other factors come into play, but maybe Rhode Island and (especially) Providence are past the point that complaints and finger-pointing should be acceptable.  Fundamentally, schools don’t exist to provide careers for adults.  They exist to educate children, and if they’re failing (utterly failing), then those adults have to take responsibility or acknowledge that the system of which they’re a part cannot do the job and let the funding go elsewhere.

[…] said, the Johns Hopkins report and, similarly, standardized test scores are not U.S. News and World Report rankings.  The report […]

[…] review.  The Institute for Education Policy at Johns Hopkins School of Education conducted a study finding that Providence schools were failing their students with an intolerable mess.  In perhaps […]